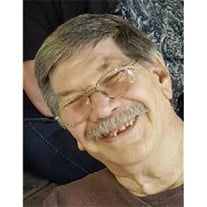 Walter David Sizemore, 76, of Herndon Heights went home to be with the Lord on Tuesday, March 7, 2017 at Bowers Hospice House, Beckley following a long illness. Born April 26, 1940, at New Richmond, he was the son of the late Luther and Dana... View Obituary & Service Information

The family of Walter D. Sizemore created this Life Tributes page to make it easy to share your memories.

Walter David Sizemore, 76, of Herndon Heights went home to be...

Send flowers to the Sizemore family.