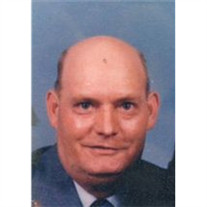 Walter Frank Lusk, 77, of Peaks Ridge, Herndon, died Wednesday, December 2, 2009 in a Princeton hospital following a short illness. Born March 4, 1932 at Herndon, he was the son of the late Walter Lee and Pollie Jane (England) Lusk. Frank was a retired coalminer having worked at Eastern Associated Coal Company for 36 years at Herndon. He attended Spruce Grove Missionary Baptist Church at Basin for 41 years where he currently served a Deacon and loved serving the Lord. Frank enjoyed hunting, gardening, and caring for his bees. He was loved and a friend to all that knew him. In addition to his parents he is also preceded in death by six brothers, Corbet, Arlie, Monterville, Edgar, Jack, and Troy Lusk; and three sisters, Agnes Whitt, Elsie Ghent, and Eula McKinney. Those left to cherish his memory are his wife of 52 ½ years, Ethel B. Graham Lusk; two sisters Bernice Lusk of Herndon and Patty Sisk and her husband, William of John Ben; several nieces and nephews; and a host of family and friends. Services will be 11:00 A.M. Sunday, December 6, 2009 at Spruce Grove Missionary Baptist Church, Basin with Rev. Gilbert Dodson, Rev. Keith Reed, and Brother Andrew Bailey officiating. Burial will follow in the Lusk Cemetery at the Lusk Settlement. Friends may call 6:00-8:00 p.m. Saturday at the Tankersley Funeral Home and one hour prior to services Sunday at the church. Pallbearers will be Jeffery Graham, Johnathan Adkins, David Lee Adkins, Jr., Landon Harman, Bill Horn, Devon Lane. Donations of sympathy may be made to the American Cancer Society, 301 RHL Boulevard, Suite 6 and 7, Charleston, WV 25309.

The family of Walter F. Lusk created this Life Tributes page to make it easy to share your memories.