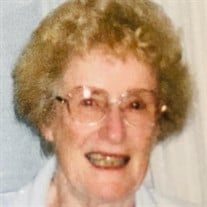 Virginia Wildey Cook, 103, died on December 3, 2021 at Elison at Maplewood in Bridgeport. WV. Virginia was born August 25, 1918 to Robert and Gertrude Wildey at Nuriva, WV, near the newly developing town of Mullens. Virginia was educated in the Mullens public schools and Virginia Intermont Women's College in Bristol, Virginia. She also graduated from West Virginia University in 1939 where she was a member of Phi Upsilon Omicron, the Home Economics Honorary, and Delta Gamma social fraternity. Virginia was married to Woodrow Cook in August 1940 and they celebrated 63 years of marriage before his death in 2004. She taught vocational home economics at Mullens High School for 33 years, was a noted flower gardener and after retirement, she and Woody enjoyed golf and square dancing with friends for many years. Along with her parents, Virginia was preceded in death by her beloved Woody, her brother Jim Wildey and her sister Betty Wildey Lewis. She is survived by her daughters Barbara Bean (Ralph) of Bridgeport, WV and Cindy Chagnon (Jean) of Bedford, NH. She is also survived by grandchildren Debbie Voorhees (Tony Bone) of Ft. Myers, FL; Katherine Carney (Carl) of Fredericksburg, VA; Jennifer Bean (John O'Neal) of Seattle, WA; Chris Chagnon (Mayte) of Keller, TX; Ginny Scease (Andrew) of Exeter, NH; Stephanie Bean of Easthampton, MA; and RJ Bean (Melissa Kelsey) of Rochester, NY. Also surviving their beloved Mamere are eight great-grandchildren and numerous nieces and nephews. Her daughters would like to especially thank Karen Holsten, whose loving care of their mother allowed her to live independently in her home until the age of 101. Funeral services will be held on Saturday, December 11, 2021 at one o'clock at Tankersley Funeral Home Chapel, Mullens with Rev. Gary Marshall officiating. Burial will follow at Blue Ridge Memorial Gardens in Beckley, WV. Friends may call one hour prior to services Saturday at the funeral home. Family will serve as pallbearers. The family requests memorial donations be made to the Virginia Cook Mullens Area Beautification Fund at the Beckley Area Foundation, 129 Main St.#301, Beckley, WV 25801. Online condolences may be expressed to the family at www.tankersleyfh.com The family of Virginia Cook is being cared for by Tankersley Funeral Home, Mullens.

Virginia Wildey Cook, 103, died on December 3, 2021 at Elison at Maplewood in Bridgeport. WV. Virginia was born August 25, 1918 to Robert and Gertrude Wildey at Nuriva, WV, near the newly developing town of Mullens. Virginia was educated in... View Obituary & Service Information

The family of Virginia Wildey Cook created this Life Tributes page to make it easy to share your memories.

Send flowers to the Cook family.