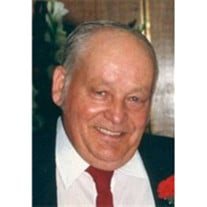 Troy Albert Lusk, "Chief", 84, of Alpoca, died Thursday, October 29, 2009 in a Beckley hospital following a long-illness. Born May 17, 1925 at Herndon, he was the son of the late Walter and Polly (England) Lusk. Mr. Lusk proudly served his country during World War II in the United States Marine Corps. Mr. Lusk returned home from the South Pacific to marry his sweetheart, Lillian Snyder Lusk, in 1946. These two sweethearts would walk hand in hand through a life that would include nine children, thirteen grandchildren, and fourteen great grandchildren. Mr. Lusk served as the chief electrician for Slab Fork Coal Company for more than 18 years. His wisdom and expertise in the field of electricity would make him a highly respected and much sought after authority in this field. He was a member of the Mullens Masonic Lodge #151 A.F.&A.M., where he was a 32nd degree mason and had served as past Master. His abiding faith and devotion to charitable work would make his membership as a Masonic brother a pleasure for his soul. Mr. Lusk was a member of the First Baptist Church Of Bud where he served as a deacon. He enjoyed many years of fellowship and love with his brothers and sisters in Christ. During his retirement years, Mr. Lusk lived a full life that would include family, church, community, and friends. Whether coon hunting, fishing or just sitting around a campfire, some of his most cherished memories would come from these simple pleasures. His generosity and kindness was greatly admired in this community. His devotion and warmth made him a trusted friend. His enormous capacity to love and to lead makes him irreplaceable to his family. His dear parents, his beloved son, Albert Lusk, and his precious granddaughter, Teresa Lusk, preceded him in death. He also had five brothers and three sisters who were waiting to greet him in Heaven when he made his journey home. The shadow of his absence is immeasurable to his family. He will be deeply missed by his loving wife, Lillian Snyder Lusk; his six daughters, Judy Shumate and her husband, Vince, of Beckley, Connie Sparks of Kingsport T.N., Sandra Taylor of Mullens, Kathy Hylton and her husband, Mark, of Beckley, Eva Lusk of Alpoca, and Peggy Lusk of Norton V.A.; his two sons, Roger Lusk and his wife, Frieda, of Princeton and Thomas Lusk and his wife, Ethel, of Herndon Heights; a daughter-in-law, Jeanne of New Jersey; thirteen grandchildren; and fourteen great grandchildren; two brothers Frank Lusk and his wife, Ethel, of Basin and Bobby Lusk and his wife, Ethel, of Princeton; and two sisters, Bernice Lusk of the Lusk Settlement and Patty Sisk and her husband, Will, of John Ben. He is also survived by many nieces, nephews, and cousins who are missing their loved one and look forward to seeing him again someday and by special friends, Jack and Jean Carter, Alan and Nancy Lindsey, Doug and Dean Taylor, Jay Bird Maynard, and numerous other friends and family and his caregiver, Delilah Hamm. The family wishes to offer a special thanks to the staff of Beckley VA Medical Center and the staff of Raleigh General Hospital. Each life touches so many others. The measure of a man's life is determined by the love and laughter he has left along the way. May you rejoice with the angels our precious Chief. Services will be 2:00 P.M. Sunday, November 1, 2009 at the First Baptist Church Of Bud with Rev. Tom Lusk and Rev. Lewis Arnold officiating. Burial will follow in the Lusk Family Cemetery at the Lusk Settlement. Friends and loved ones may call on the family Saturday from 6:00-8:00 P.M. at the Tankersley Funeral Home, Mullens and one hour prior to services Sunday at the church. Masonic graveside rites will be conducted by the Mullens Masonic Lodge #151 A.F.& A.M. Pallbearers will be Larry Presley, David Booth, Andy Hall, Matthew Stoddard, Larry Lusk, and Bill Horne.

Troy Albert Lusk, "Chief", 84, of Alpoca, died Thursday, October 29, 2009 in a Beckley hospital following a long-illness. Born May 17, 1925 at Herndon, he was the son of the late Walter and Polly (England) Lusk. Mr. Lusk proudly served his... View Obituary & Service Information

The family of Troy A. Lusk created this Life Tributes page to make it easy to share your memories.