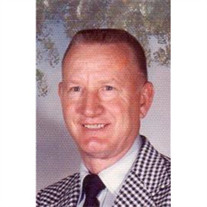 Tollison Lusk, Jr., 85, of Bud passed away on Monday, April 8, 2013 peacefully at his home. Born March 20, 1928 at Herndon, he was the son of the late Charley E. and Metta (Garretson) Lusk of Herndon, WV. Tollison was a veteran of the Korean Conflict and was honorably discharged. He was a deacon of the Bud Baptist Church having served in numerous positions in the church over the years. His work career included N&W Railroad as a boilermaker. He was a boilermaker at Beach Grove, Indiana, a boiler inspector for Hartford Steam Boiler, boiler inspector for the State of WV, and retired from Commercial Union Ins. as a safety inspector. Mr. Lusk was a loving husband, father, grandfather, and great grandfather. He will be greatly missed. In addition to his parents, he was preceded in death by one brother, Roy Lusk; two sisters, Pansie Snyder and Carrie McKinney; and four brother-in-laws, Noah Mills, Harold Howerton, Ira Snyder and Murel McKinney. Mr. Lusk is survived by his wife of 56 years, Alma (Shrewsberry) Lusk; a daughter, Pamela (Lusk) Bishop and her husband, Jeffrey of Bud; one son, Gregory B. Lusk and his wife, Charlotte of Corinne; five grandchildren, Adam Bishop, Stacie Allen and her husband, Matthew, Joshua Bishop and his wife, Kara, Brian Lusk and Amy Lusk; one great- grandchild, Olivia Allen; two sisters, Myrtle Mills of Herndon and Gracie Howerton of Princeton; one sister-in-law, Mary Lusk of Herndon; and a host of nieces and nephews. Services will be 11:00 A.M. Thursday, April 11, 2013 at the Tankersley Funeral Home Chapel with Rev. Tom Lusk officiating. Burial will follow in the Lusk Cemetery, Lusk Settlement. Friends may call from 6:00 P.M. to 8:00 P.M. Wednesday at the funeral home. Family and friends will serve as pallbearers. The family would like to thank his caregivers, Elfreda, Brenda, and Nancy for their kindness and care. Also, we would like to thank our family and friends for their prayers and support. The family of Tollison Lusk is being cared for by the Tankersley Funeral Home, Mullens.

Tollison Lusk, Jr., 85, of Bud passed away on Monday, April 8, 2013 peacefully at his home. Born March 20, 1928 at Herndon, he was the son of the late Charley E. and Metta (Garretson) Lusk of Herndon, WV. Tollison was a veteran of the Korean... View Obituary & Service Information

The family of Tollison Lusk created this Life Tributes page to make it easy to share your memories.