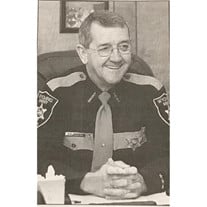 On December 24, 2019, Sheriff C.S. "Sherill" Parker passed away with his loving family by his side.  Born on March 28, 1947, in Edgarton, WV. He was of the Christian faith.  Sherill is the son of the late Cloyd and Kathleen Parker. He was preceded in death by his loving wife of 43 years Helen Irene Graham Parker.  Two brothers:  Jackie Parker and Merrill Parker.  Three sisters:  Sarita Francis, Sonia Shrewsbury and Okey Nadine Goodwin.  His in-laws, the late Wyoming County Sheriff Herbert Graham and Kathleen Graham. Those left to cherish his memory include his sons, Scott (Kimberly) Parker of Lake Norman, NC and Beckley, WV.  Their children Corporal Nicholas Scott of Beckley, WV, Kaitlyn Grace and Chandler Ty Scott both of Lake Norman, NC.  Patrick R. Parker (Carl Sears) of Daniels, WV and their children Hunter Graham, Parker Jace and Penelope Helen.  Sister, Patricia R. Parker Burrell of Princeton, WV.  Several nieces, nephews and a host of lifelong friends. Sherill graduated from Mullens High School, Class of 1965.  Attended the West Virginia State Police Academy 25th Basic Police Training Class.  He has been in law enforcement for 45 years.  He was currently serving his fourth term as Sheriff of Wyoming County.  His law enforcement career started as Deputy of Wyoming County under the late Sheriff Herbert "Butch" Graham, Chief Criminal Investigator under the late Sheriff Gene Vance, Assistant Chief of Police for Mullens PD, and Chief Deputy under Sheriff Randall Aliff. Sherill was a member of the WV Sheriff's Association, National Sheriff's Association, Fraternal Order of Police, was named "Citizen of the Year" and many more accomplishments.  During his tenure he was most proud of battling the drug epidemic throughout the county.  His philosophy of life was: "You can never advance in life without giving all you have and working hard every day.  Remember that everyone is someone's mother, father, sister or brother and that everybody should be treated equally." Sherill was a loving and thoughtful husband, father, Papaw and friend.  He was extremely proud of his six grandchildren and loved them dearly.  One of his greatest moments was when he was afforded the opportunity to present his oldest grandson Nicholas, his diploma from the WV State Police Academy Basic Police Training graduation ceremony in May 2019. Sherill was an avid gun enthusiast, knife collector and enjoyed fishing and working in his yard. The family would like to express their gratitude to Dr. and Mrs. Dominador Lao for their special friendship and care.  Beckley ARH Hospital nursing staff: ER, 2nd Floor, PCU, Mullens Fire Department, Wyoming County Sheriff's Office, Tax Department, Courthouse employees, Wyoming County Board of Education, Tankersley Funeral Home, Roselawn Memorial Gardens staff and the Citizens of Wyoming County for their support over the years. In honor of Sherill and his love for his hometown of Mullens, WV, donations can be made to the City of Mullens Foundation, P O Box 266, Mullens, WV. 25882. The Sheriff will be taken to the Wyoming County Courthouse on Sunday, December 29, 2019 where he will Lie in State and friends may pay their respects from Noon to 4:00 P.M. At 4:00 P.M. the Sheriff will be taken to the Mullens Middle School Gym where the family will receive friends from 6:00 P.M. to 8:00 P.M. Funeral services will be held at 11:00 A.M. Monday, December 30, 2019 at the Mullens Middle School Auditorium and burial will follow in Roselawn Memorial Gardens, Princeton. Deputies from the Wyoming County Sheriff's Office will serve as pallbearers. Online condolences may be expressed to the family at www.tankersleyfh.com The family of Sheriff C.S. Parker is being cared for by Tankersley Funeral Home, Mullens.

On December 24, 2019, Sheriff C.S. "Sherill" Parker passed away with his loving family by his side.  Born on March 28, 1947, in Edgarton, WV. He was of the Christian faith.  Sherill is the son of the late Cloyd and Kathleen Parker. He was preceded... View Obituary & Service Information

The family of Sheriff C.S. Parker created this Life Tributes page to make it easy to share your memories.

Send flowers to the Parker family.