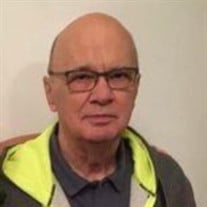 Russell Elmus Wiley, Sr., 76, who was affectionately called "Pop-Pooh", departed his loving wife, children, and grandchildren to be home with his Lord and Savior on Thursday, November 11, 2021 following a long illness. Russell was born on April 8, 1945, in Princeton, WV to the late Irene and Elmus Wiley. Russell was a member of the Masonic Grand Lodge of Georgia F & A.M. Hapeville #590. He was a 1963 graduate of Princeton High School and after graduating he attended Spartan Aeronautical School in Tulsa, OK. Shortly thereafter, he began his career with Delta Airlines. He started as a Mechanic, advanced to a Foreman, and finished his career as an Engine Analyst when he retired after thirty-seven years of service. Shortly before graduating from Spartan, Russell married his high school sweetheart, Cheryl Margaret Rorrer on June 25, 1964. They have three children, Donna Simmons and her husband, Jeff, Leigh Ann Harvey, and Russell Elmus Wiley, Jr. all of Maben. Russell was an extremely proud Pop-Pooh and treasured his time with his grandchildren, Jeffrey, Hunter, Emily, Kylie Simmons, Guy (Treigh) Patterson, III, Maegan, Merideth, Christopher, Jacob Harvey, Cody, and Lexi Wiley. Also left to cherish his memory are his sisters, Anita Price and her husband, Randy of Bland, VA and Elaine Isaac (Steve Belcher) of Daleville, VA; brother-in-laws, Daniel E. Rorrer and his wife, Barbara of Tampa, FL, Michael D. Rorrer and his wife, Linda of Roanoke, VA; and sister-in-laws, Candy Thomas and her husband, Marshall of Salem, VA; and many nieces, nephews, and cousins. Russell will also be greatly missed by his sweet Yorkie, "Gracie". In his leisure he enjoyed fishing, hunting, gardening, and loved watching his Atlanta Braves. Services will be 12 Noon, Monday, November 15, 2021 at Tankersley Funeral Home Chapel, Mullens with Mike Endreson and Doug Thorn officiating. Burial will follow in Blue Ridge Memorial Gardens, Beckley. Friends may call one hour prior to services Monday at the funeral home. Masonic graveside rites will be conducted by the Beckley Masonic Lodge #95 A.F. & A.M. Family would like to express a heartfelt thank you to Dr. Johnny Walker and his nurse, Chelsea, Hospice of Southern West Virginia especially, Susan Fleming and Kelly, Charlies Pharmacy, and special friends, Teddy and Linda Tolliver. Online condolences may be expressed to the family at www.tankersleyfh.com The family of Russell Wiley is being cared for by Tankersley Funeral Home, Mullens.

Russell Elmus Wiley, Sr., 76, who was affectionately called "Pop-Pooh", departed his loving wife, children, and grandchildren to be home with his Lord and Savior on Thursday, November 11, 2021 following a long illness. Russell was born on April... View Obituary & Service Information

The family of Russell Elmus Wiley, Sr. created this Life Tributes page to make it easy to share your memories.