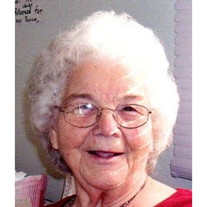 Ruby Mae (Manning) Shrewsbury, 82, of Egeria was called home on Monday, December 8, 2014 at her residence surrounded by her loving family. Born June 17, 1932 at Amigo she was the daughter of the late John Winfred Manning and Beatrice Mildred (Jewell) Honeycutt. Ruby was a homemaker and was a member of the Fairview Freewill Baptist Church, Odd. When her family pauses to remember Ruby, they shall always remember her as being a loving and devoted mother, grandmother, great grandmother, great great grandmother, and sister. To her children she was considered the greatest woman on earth. In addition to her parents she is also preceded in death by her husband, Clyde S. Shrewsbury, Sr.; a daughter, Sandra Yvonne Reed; a granddaughter, Jennifer Renea Farley; a grandson, Robert S. Sizemore; and a brother, Monty Manning. She was the beloved mother of, Della Wall and her husband, Scotty of Princeton, Sylvia Hamden of Huntington, and Ilene Farley of Stephenson, Winfred Shrewsbury and his wife, Dorothy of Princeton, Clyde S. Shrewsbury, Jr. and his companion, Jean of Odd, and Donald Shrewsbury of Pilot Mountain, NC; her loving companion, Lathern White; 33 grandchildren, 35 great grandchildren, and one great great grandchild; one sister, Louise Lester of Iroquois; one brother, Gene Manning of Marion, MD; and she will be sadly missed by numerous other family, friends, and her church family. Services will be 1:00 P.M. Friday, December 12, 2014 at the Fairview Freewill Baptist Church, Odd with Pastor Charlie Tilley officiating. Burial will follow in the Shrewsbury Family Cemetery, Egeria. Friends may call Thursday, December 11, 2014 from 6:00 P.M. to 8:00 P.M. at Tankersley Funeral Home, Mullens and one hour prior to services Friday at the church. Family will serve as pallbearers. Online condolences may be expressed to the family at www.tankersleyfh.com The family of Ruby Shrewsbury is being cared for by Tankersley Funeral Home, Mullens.

Ruby Mae (Manning) Shrewsbury, 82, of Egeria was called home on Monday, December 8, 2014 at her residence surrounded by her loving family. Born June 17, 1932 at Amigo she was the daughter of the late John Winfred Manning and Beatrice Mildred... View Obituary & Service Information

The family of Ruby Mae Shrewsbury created this Life Tributes page to make it easy to share your memories.