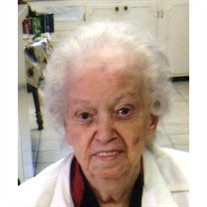 Rosa Emma McKinney, 93, of Rhodell passed away on Saturday, January 3, 2015 in a Beckley hospital following a short illness. Born May 9, 1921 at Taylors Chapel, AL, she was the daughter of the late James R. Johns and Emma Johnson Johns. Mrs. McKinney was a former manager of Gulf Supermarket, Rhodell, a past Mayor and Council Woman for the city of Rhodell, the first female Mayor in the state of West Virginia, she served as the Mayor of Rhodell during the early 1960's when John F. Kennedy was President and was a former member of the Petticoat Legislature. Rosa was an 80 year member of the Rhodell Church of God where she was a former Song Director, Sunday School Teacher for the Adult Class, and Church Clerk. She was a former cook at the Rhodell Grade School and a former member of the Rhodell Woman's Club. In her leisure she enjoyed sewing, cooking, and flower gardening. She especially loved spending time with her children and grandchildren, and was the last surviving member of her immediate family. In addition to her parents she is also preceded in death by her husband, Orlie L. McKinney; four sisters, Cordelia Gaither, Lillian Harrison, Salome Fredericks, and Mildred Burton; five brothers, Otis, Rader, Watson, James (Jim), and Wilburn Johns; and a son-in-law, William Minnick. Those left to cherish her memory include two daughters, Emma Jean Minnick of Troy, Michigan and Patricia Whitt and her husband, Jack of Crab Orchard; two sons, Randall McKinney and his wife, Gaye of Illinois and Roger McKinney and his wife, Velda McKinney of Crab Orchard; ten grandchildren and fifteen great grandchildren. Services will be 12 Noon, Wednesday, January 7, 2015 at the Rhodell Church of God, Rhodell with Rev. Gary Eskins officiating. Burial will follow in Sunset Memorial Park, Beckley. Friends may call Tuesday from 6:00 P.M. to 8:00 P.M. at Tankersley Funeral Home, Mullens and one hour prior to services Wednesday at the church. Grandsons will serve as pallbearers. The family requests donations of sympathy be made in Mrs. McKinney's memory to the Rhodell Church of God P.O. Box 175 Rhodell, WV 25915. Online condolences may be expressed to the family at www.tankersleyfh.com The family of Rosa McKinney is being cared for by Tankersley Funeral Home, Mullens.

Rosa Emma McKinney, 93, of Rhodell passed away on Saturday, January 3, 2015 in a Beckley hospital following a short illness. Born May 9, 1921 at Taylors Chapel, AL, she was the daughter of the late James R. Johns and Emma Johnson Johns. Mrs.... View Obituary & Service Information

The family of Rosa E. McKinney created this Life Tributes page to make it easy to share your memories.

Rosa Emma McKinney, 93, of Rhodell passed away on Saturday, January...

Send flowers to the McKinney family.