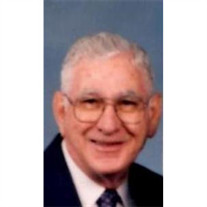 Robert Avery "Mook" Runion, 85, of Bud, passed away on Friday, September 6, 2013 at CAMC General Division, Charleston following a sudden illness. Born January 20, 1928 at Goodwill, he was the son of the late William McKinley and Dorcas (Church) Runion. Known to most people as "Mook", he was a proud 45 year retiree of Appalachian Power Company and was the last surviving member of the original Mullens Crew. He was a 65 year faithful member of the Bud Baptist Church, where over the years he served as a trustee, usher and deacon and had served as treasurer for 32 years. In addition to his parents, he is also preceded in death by his loving wife of 64 years, Mable Rose Runion, in July, 2012 and by his brother, William "Bill" Runion, Jr. Those left to cherish his memory include his daughter and son-in-law, Jeanne and Johnny Worley of Mullens and his son and daughter-in-law, Terry and Kim Runion of Mullens; two granddaughters, Tara Runion King and her husband, Matthew of St. Pauls, NC and Allyson Runion Coleman and her husband, Randy of China Grove, NC and a step-grandson, John Michael Thornsbury of Hanover; four great-grandchildren, Claire King and Wyatt, Olivia, and Luke Coleman; a sister-in-law, Dorothy Runion of Beckley; a brother-in-law, Carmel Hill and his wife, Beulah of Pineville; and a special cousin, Opal White of Topsail, NC, formerly of Bud. Services will be 11 A.M. Monday, September 9, 2013 at the Bud Baptist Church with Pastor Tom Lusk officiating. Burial will follow in Roselawn Memorial Gardens, Princeton. The family will receive friends Sunday from 6 to 8 P.M. at the Tankersley Funeral Home, Mullens and one hour prior to services Monday at the church. Pallbearers will be Larry "Cotton" Shrewsbury, Steve Clark, Byron Stump, Billy Wayne Bailey, Jr., Mike Sandy, Lee Ross and Kyle Sandy. Honorary pallbearers will be Jack Martin, Ken Sigmon, Rick Mitchell, Jack Carter and a special friend, Jon McKinney. The family of "Mook" Runion is being cared for by the Tankersley Funeral Home, Mullens.

Robert Avery "Mook" Runion, 85, of Bud, passed away on Friday, September 6, 2013 at CAMC General Division, Charleston following a sudden illness. Born January 20, 1928 at Goodwill, he was the son of the late William McKinley and Dorcas (Church)... View Obituary & Service Information

The family of Robert A. Runion created this Life Tributes page to make it easy to share your memories.

Send flowers to the Runion family.