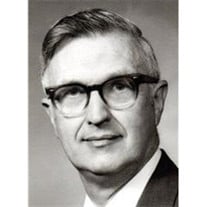 Robert Lee "Bob" Loudermilk, 83, of Holiday Drive, Beckley, was called home to be reunited with his wife, parents, and brother on Tuesday, January 8, 2013 at his residence following a long illness. Born February 24, 1929 at Ronceverte, he was the first son born to the late Emmitt Ray and Mary Estella (Erskine) Loudermilk. Bob was a 1947 graduate of Ronceverte High School, also graduating from West Virginia Tech with a degree in engineering, was a retired employee of Appalachian Electrical Power with over forty years of service, retiring in 1993 as a Marketing Services Supervisor. He was a 52 year member of the United Methodist Temple, Beckley. During this time he served on numerous committees. He was a member and past chairman of the Administrative Board and Council on Ministries, was a member of the Finance Committee, was a past member, and president of United Methodist Men. Bob was also on the Building Committee which was instrumental in moving from the downtown church to the present location and served for many years as Head Usher. Bob served his country as a veteran of the U.S. Army having served during the Korean Conflict. In addition to his parents, he was preceded in death by his wife of 50 years, Marie Vest Loudermilk in 2005; and a brother, Norman Ray Loudermilk. Those left to cherish his memory include his children, David Lee Loudermilk at home, Carol Wood of Beckley, and Susan Perry and her husband, Rob of Beaver; five grandchildren, Jonathan and Brianna Wood of Beckley, Robby, Ray, and Morgan Perry of Beaver; three sister-in-laws, Kitty Loudermilk of Lewisburg, Jeanette Vest and Louise Vest; a brother-in-law, Perry Vest; and numerous nieces and nephews. The family wishes to express a special thanks to his caregivers, Karla Long, Donna Atkins, and Robin Wood. When we pause to remember Bob, we shall remember his devotion to his wife, Marie, and son, David for being their caregiver. We shall always remember his dedication to his church, and it has often been said by numerous people, "Every church needs a Bob Loudermilk". Services will be 11:00 AM Friday, January 11, 2013 at The United Methodist Temple, Beckley with Pastor Randy Adkins and Rev. Dan Johnson officiating. Burial will follow in Blue Ridge Memorial Gardens, Beckley. Friends may call Thursday evening from 6:00-8:00 PM at the church and one hour prior to the services Friday at the church. Pallbearers will be Rob Perry, Robby Perry, Ray Perry, David Earehart, Kelley Sponaugle, Wayne Burge, and Rick Gray. Honorary pallbearers will be Bill Jameson, Ross Hutchens, Gus Farris, Bill Straub, Jr., and members of United Methodist Men. For those considering an expression of sympathy the family requests contributions be made to United Methodist Temple, 201 Templeview Drive, Beckley, WV 25801. The family of Bob Loudermilk is being cared for by his grandchildren, Jonathan and Brianna Wood who are students at Pittsburgh Institute of Mortuary Science, under the direction of Tankersley Funeral Home, Mullens.

Robert Lee "Bob" Loudermilk, 83, of Holiday Drive, Beckley, was called home to be reunited with his wife, parents, and brother on Tuesday, January 8, 2013 at his residence following a long illness. Born February 24, 1929 at Ronceverte, he was... View Obituary & Service Information

The family of Robert Lee Loudermilk created this Life Tributes page to make it easy to share your memories.

Send flowers to the Loudermilk family.