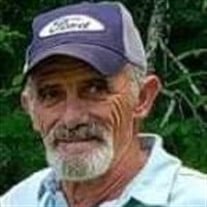 Robert Glenn Cox, known to many as Poppy or Bob, 68, of Amigo, went home to be with the Lord on Saturday, June 12, 2021 at Bowers Hospice House following a sudden illness. Born February 11, 1953, at Fairmont, he was the son of the late John and Bertha Barron. Bob was a retired electrician with 42 years of service in the coal mines. He enjoyed his summer months at his river camp on Talcott and Willowwood Golf Course. There was never a job to big and he was always willing to lend a helping hand. He was preceded in death by his parents William and Haley (McKinney) Cox; four brothers, David Cox, Joe Myers, Butch Barron, and Jeff Myers; and one sister, Judy K, Long. Those left to cherish his memory include his loving wife of 48 years, Debra (Harper) Cox; two sons, Robert Brian Cox of North Carolina and Dennis William Cox and his wife, Tracy of Mullens; one daughter, Sophie Ann Cox whom he called his "stinker" at home; three grandsons, Brian Tyler Cox and his wife, Selena of Beckley, Dylan Keith Cox, Ethan William Cox of Mullens; two granddaughters, Kealee Cox and Olivia Grace Cox of Mullens; three brothers, Thomas R. Cox and his wife, Billie of Stotesbury, Russell E. Cox and his wife, Peggy of Tobaccoville, NC, James Myers and his wife, Donna of Cleveland, OH; and one sister, Kimberly Myers and her husband, Phillip of Cleveland, OH; several nieces, nephews, many, many friends, and special neighbors. In lieu of flowers, the family requests donations of sympathy be made to the Bowers Hospice House 454 Cranberry Drive, Beckley, WV 25801 in memory of Bob. As per Bob's wishes, cremation will follow, and there will be a memorial service at a later date. Online condolences may be expressed to the family at www.tankersleyfh.com The family of Robert G. Cox is being cared for by Tankersley Funeral Home, Mullens.

Robert Glenn Cox, known to many as Poppy or Bob, 68, of Amigo, went home to be with the Lord on Saturday, June 12, 2021 at Bowers Hospice House following a sudden illness. Born February 11, 1953, at Fairmont, he was the son of the late John... View Obituary & Service Information

The family of Robert Glenn Cox created this Life Tributes page to make it easy to share your memories.

Send flowers to the Cox family.