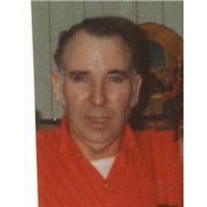 Robert Clair "Bob" Byars, Sr., 76, of Garwood, passed away Wednesday, Feb. 17, 2010 at Princeton Community Hospital following a long illness. Born September 21, 1933 at Itmann, he was the son of the late Pink Byars, Jr. and Cora Mae Tolliver Byars. Robert was raised on Bud Mountain and then at the age of eighteen he joined the US Marine Corps and served from April 1951 until April 1954, having served during the Korean Conflict. During his working career, Bob was a retired coal miner and former truck driver, which he really loved to do. He was also a member of UMWA. He was the oldest living member of the Herndon Freewill Baptist Church. In addition to his parents, he was also preceded in death by a brother, Mickey Byars; several other infant brothers and sisters; a son-in-law, Bennie Raye; and a nephew, Dale Byars. Those left to cherish his memory include his wife, Norma Jean Shaw Byars, whom he married on May 5, 1954, and who still resides at Garwood; his children, Robert (Bucky) Byars, Jr. of Salisbury, NC, Debbie Raye of Bud, Kathi Elliott and husband, Estil, and Michael Byars and wife, Teresa, all of Bud Mtn., Kevin Byars and wife, Donna, of Princeton, and Angel Downing and husband, Jason, of Garwood; five grandchildren and nine great-grandchildren; brothers, Freeman Byars and his wife, Patty of Crown Point, Indiana, Benny Byars and his wife, Lora, of Plymouth, Indiana; sisters, Etta Byars of El Cajon, CA, and Betty Wesley and her husband, Acie, of Ravencliff; and numerous friends. Services will be 1:00PM Saturday, February 20, 2010 at Herndon Freewill Baptist Church with Rev. William O. Tolliver and Rev. Ricky Shrewsbury officiating. Burial will follow in the Moran Cemetery, Bud Mtn. Friends may call one hour prior to services Saturday at the church. Pallbearers will be Elmer (Fudge) Ramsey, Michael Byars, Brian Raye, Kenny Raye, Noel Bishop, Preston Jenkins, Kevin Byars, and Jason Downing.

The family of Robert C. Byars, Sr. created this Life Tributes page to make it easy to share your memories.