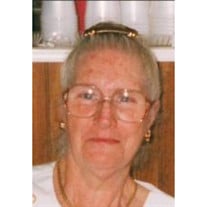 Rebecca Fern Thorn, 77, of New Richmond passed away Thursday, May 28, 2009 at her residence surrounded by her family to join her Lord and be reunited with her beloved husband, Carl C. Thorn. Born September 28, 1931 at New Richmond, she was the daughter of the late William Henry Blankenship, Sr. and Enis Halsey Blankenship. Fern was a homemaker, a Baptist by faith and attended The First Church of God at Corinne. She was a people person and loved spending time with her family and visiting with friends. In her leisure she enjoyed gardening and canning. In addition to her parents, she is preceded in death by her husband, Carl C. Thorn, whom she married on September 25, 1948; a son, David H. Thorn; two daughters, Ruby Arliene Thorn and Hope Thorn; and two brothers, Timmy and Jack Blankenship. Those left to cherish her memory include a daughter, Diane Lynn Vance of New Richmond; five sons, Bobby Dean Thorn and his wife, Kim, of Vanceboro, NC, Marvin Craft Thorn of New Richmond, Douglas Ross Thorn of McGraws, Buddy Owen Thorn and his wife, Barbara, of Moorefield, WV and Kennith Kyle Thorn and his wife, Brenda, of New Richmond; five sisters, Geraldine Najjar and her husband, Albert, of Atlanta, Ga., Rita Eden of Pineville, Drema Taylor of Ohio, Sharon Seymour and her husband, David, of NC and Julia Cox and her husband, Ron, of NC.; four brothers; William H. Blankenship, Jr. and his wife, Betty, of Lester, Terry Blankenship and his wife, Carol, of Ohio, Mackie Blankenship of Crab Orchard and Eugene Blankenship and his wife, Leigh, of NC; a sister in law, Viola O'Donnell of Princeton; twelve grandchildren; two step grandchildren; eight great-grandchildren; and nine step grandchildren. Services will be 11:00 a.m. Monday, June 1, 2009 at the Tankersley Funeral Home Chapel, Mullens with the Rev. Larry England officiating. Burial will follow in Roselawn Memorial Gardens, Princeton. Friends may call Sunday evening from 6 to 9 pm at the funeral home. Family and friends will serve as pallbearers.

Rebecca Fern Thorn, 77, of New Richmond passed away Thursday, May 28, 2009 at her residence surrounded by her family to join her Lord and be reunited with her beloved husband, Carl C. Thorn. Born September 28, 1931 at New Richmond, she was... View Obituary & Service Information

The family of Rebecca F. Thorn created this Life Tributes page to make it easy to share your memories.

Send flowers to the Thorn family.