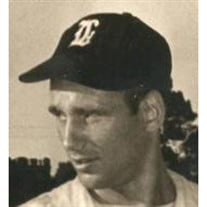 Raymond Flaim, 81, of Corinne passed away on Friday, September 23, 2011 at Bowers Hospice House, Beckley following a courageous 30-year battle with Parkinson's disease. Born September 9, 1930 at Wyco, he was the son of the late Ernest Eugene and Mary (Rossi) Flaim. Mr. Flaim was a former brakeman for Norfolk and Southern Railroad retiring with 42 years of service, was a former coal miner, a former security guard for a Nuclear Power Plant in Ohio, and played professional baseball in the minor leagues where he played for the Cubs. He was a veteran of the U.S. Army having served during the Korean Conflict, was a member of the Mullens Wesleyan Church, Mullens Moose Lodge, and the Mullens American Legion. In his leisure he enjoyed to hunting, fishing, gardening, and was an avid player at checkers, horseshoes, and pool. In addition to his parents, he was preceded in death by one brother. Those left to cherish his memory include his loving wife of 57 years, Shirley A. Cook Flaim; a daughter, Tina McGlothlin and her husband, Gene, of Barkers Ridge; three sons, Anthony R. Flaim and his wife, Donna, of Pineville, Robert E. Flaim of Corinne, and Buck Flaim and his wife, Melissa, of Corinne; four grandsons, Aaron, Nathan and his wife, Jenny, Kevin, and Kyle; two granddaughters, Heather and Mia; and one brother, Guido Flaim and his wife, Bessie. Services will be 2:00 p.m. Monday, September 26, 2011 at the Tankersley Funeral Home Chapel with Rev. Larry Lafferty officiating. Burial will follow in Blue Ridge Memorial Gardens, Beckley. Friends may call from 6:00-8:00 p.m. Sunday, September 25, 2011 at the funeral home. Grandsons and nephews will serve as pallbearers. The family wishes to express their heart felt appreciation to the staff of Bowers Hospice House for the care they showed Raymond during his final days. The family requests donations of sympathy be made to the Bowers Hospice House, 454 Cranberry Drive, Beckley, WV 25801, or to the Mullens Wesleyan Church, 1907 Moran Avenue, Mullens, WV 25882.

Raymond Flaim, 81, of Corinne passed away on Friday, September 23, 2011 at Bowers Hospice House, Beckley following a courageous 30-year battle with Parkinson's disease. Born September 9, 1930 at Wyco, he was the son of the late Ernest Eugene... View Obituary & Service Information

The family of Raymond Flaim created this Life Tributes page to make it easy to share your memories.

Raymond Flaim, 81, of Corinne passed away on Friday, September...

Send flowers to the Flaim family.