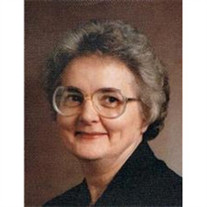 Our most beloved Rachel Elizabeth Snavely Conley, 81, of Amigo, left her earthly life for life eternal on Friday, May 4, 2012. She battled poor health for years, aided by a deep faith, a strong character and a loving family. Born Nov. 19,1930, in Cleveland, Ohio, she was the daughter of the late John Henry and Elizabeth Cook Snavely. She grew up in Draper, VA and graduated from Draper High School. She attended Bluefield Business College, where she met her husband, Aubrey. Employed by the Wyoming County Board of Education for 24 years, she served as secretary at Mullens Middle School from 1965-89. She was a member of the Mullens United Methodist Church. Prior to its closing, she was a member for nearly 50 years at the Stephenson United Methodist Church and was the secretary there for over 30 years. She loved to read, made lovely quilts for many family members and liked to cultivate flowers. In later years, confined to her bed, she found consolation in the music of the Gaithers and enjoyment in classic television shows. In addition to her parents, she was preceded in death by a grandson, Jordan Williams; three sisters, Ruth Rupe, Dorothy Reece and Louise Robbins; and one brother, Thomas Snavely. Familly was always paramount in her life, and those left to treasure her memory include her husband and soul mate of 62 years, Aubrey Conley: four devoted children, Patsy Parker and her husband, Dale, of Chapmanville, Susan and her husband, John Williams, of Raleigh NC, Roger and his wife, Kathy, of Stephenson and John of Amigo; six grandchildren, whom she loved to spoil, Bret Parker and his wife, Sue, of Burlington NC, Ashley Elam of Huntington, Rev. Tyler Williams of Sanford, NC and Tanner Williams of Raleigh, NC, Justin Conley of Monterey, CA and Andrea Smith and her husband, Larry, of Crestview, FL; four great-grandchildren, Annika Elam and Aracoma Richardson of Huntington and James and Charlie Smith of Crestview, FL; her beloved sister, Jane Hurst, of Salem, VA; and many nieces and nephews. The family extends its thanks to the many supportive friends and neighbors, Dr. E.J. Salon and his staff, Dr. Ali Suleiman and his staff, the staff at the Fresenius Dialysis Center in Beckley, helpers from the Wyoming County Council on Aging and crews from Jan-Care Ambulance Service who treated her so kindly. The funeral service will be held at 12 Noon, Tuesday, May 8, 2012 at the Tankersley Funeral Home Chapel, Mullens with Rev. Rick Chester and Rev. Earle Arthur, Jr. officiating. Burial will follow in Roselawn Memorial Gardens, Princeton. Visitation will precede the service from 11 a.m. to Noon at the funeral home. Arrangements and care of the Rachel Conley family have been entrusted to the Tankersley Funeral Home, Mullens.

Our most beloved Rachel Elizabeth Snavely Conley, 81, of Amigo, left her earthly life for life eternal on Friday, May 4, 2012. She battled poor health for years, aided by a deep faith, a strong character and a loving family. Born Nov. 19,1930,... View Obituary & Service Information

The family of Rachel E. Conley created this Life Tributes page to make it easy to share your memories.

Our most beloved Rachel Elizabeth Snavely Conley, 81, of Amigo,...

Send flowers to the Conley family.