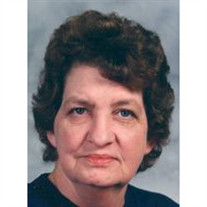 Phyllis Ann Williams, 69, of Mullens died Tuesday, September 28, 2010 in a Beckley hospital, following a long illness. Born May 14, 1941 at Caretta, West Virginia, she was the daughter of the late Victor B. and Sybil (Sampson) Lawson. Phyllis was a homemaker; a 1958 graduate of Mullens High School; had been a resident of Mullens for the past 64 years; and was a former employee of the Wyoming County Board of Education where she was a cook at Mullens High School and retired as a cook in December of 2001 from Wyoming East High School. In addition to her parents, she was preceded in death by her husband, John F. Williams; a brother, Arnold Lawson; and two sisters, Glenda Lawson and Vickie Lynn Sizemore. Those left to cherish her memory include two daughters, Cindy Jones and her husband, Jim, of Crab Orchard and Vickie Walker and her husband, Eddie, of Mullens; one son, Eddie Williams and his wife, Alica, of Beckley; eight grandchildren, Kelly Phillips and her husband, Jay, Todd Whitt and his wife, Kassi, Krista Jones and her husband Erik, Nick Walker, Kari Walker, Nathan Williams, Logan Williams, and Brady Williams; five great- grandchildren, Caeden, Leo, Cooper, Ollie, and McKenna; five sisters, Betty Goad and her husband, Lawrence, Lois Presley, and Jeanette Compton and her husband, Al, all of Mullens, Brenda Salango and her husband, Tom, of Hurricane, and Carol McKinney and her husband, Calvin, of Charleston; two brothers, Donnie Lawson and his wife, Linda, of Mullens and Ronnie Lawson and his wife, Natalie, of Randleman, N.C.; and numerous nieces and nephews. Services will be 11:00 a.m. Friday, October 1, 2010 at the Mullens Pentecostal Holiness Church with Rev. Lewis Arnold officiating. Burial will follow in Blue Ridge Memorial Gardens, Beckley. Friends may call from 6-8:00 p.m. Thursday at the Mullens Pentecostal Holiness Church and one hour prior to services Friday at the church. Nephews will serve as pallbearers. The family requests in lieu of flowers, donations of sympathy be made to the Autism Recovery Resource Center, P.O. Box 5456, Beckley, WV 25802 in honor of her great-grandson, Leo Whitt.

Phyllis Ann Williams, 69, of Mullens died Tuesday, September 28, 2010 in a Beckley hospital, following a long illness. Born May 14, 1941 at Caretta, West Virginia, she was the daughter of the late Victor B. and Sybil (Sampson) Lawson. Phyllis... View Obituary & Service Information

The family of Phyllis Ann Williams created this Life Tributes page to make it easy to share your memories.

Send flowers to the Williams family.