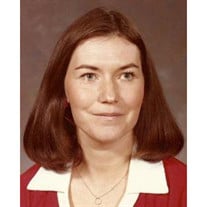 Billie Rae (Penny) Linkous, 66, passed away peacefully on Monday, April 27, 2015 at Thomas Memorial Hospital in South Charleston after a long illness. Born August 5, 1948 in Mullens WV, Penny was the daughter of the late Raymond Cook and Billy Jean Blankenship. Penny was a graduate of Mullens High School class of 1966. She graduated from Concord College with a BA in Education in 1979. She went on to pursue graduate degrees from West Virginia University and Marshall University. She retired as a well-loved teacher from Herndon Consolidated in 2008. She was an avid tennis player who spent time playing and watching the game. Penny loved her family, friends, teaching, and all sports. She attended the Mullens Pentecostal Holiness Church. In addition to her parents, Penny was preceded in death by her son-in-law, Stacy McLamb of Mullens. Those left to cherish her memory include her two loving daughters, Kelly Linkous McLamb and Jenny Gillispie and her husband Kevin all of Mullens; granddaughter Kaitlynn Gentry and grandson Tanner Gentry, both of Mullens; two sisters, Debbie Canada and her husband Mike of West End, NC; Barbara Coleman and her husband Mitch of Southern Pines, NC; three brothers, Randy Cook of Jacksonville, Florida; Jack Blankenship of Aberdeen, NC; and Jimmy Blankenship-Coombs and his husband Jim of Morgantown, WV; and several nieces and nephews she loved dearly. A celebration of Penny's life will be held on Friday, May 1st, 2015 at 2 pm at the Mullens Pentecostal Holiness Church with Rev. Lewis Arnold officiating. Friends may call one hour prior to services at the church. In keeping with her wishes, the body will be cremated. Online condolences may be expressed to the family at www.tankersleyfh.com. The family of Penny Linkous is being cared for by Tankersley Funeral Home, Mullens.

The family of Penny Linkous created this Life Tributes page to make it easy to share your memories.

Send flowers to the Linkous family.