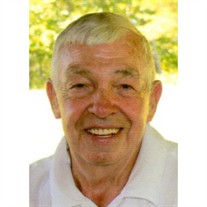 Paul Cornell Stacy Burrell, 78, of Princeton formerly of Wyoming County, ended his battle with cancer on February 24, 2016 at his residence surrounded by his family. Born December 18, 1937 at Micajah, WV, he was the son of the late Paul Edward and Mary Helen Burrell. Paul attended Herndon High School. He was a paratrooper in the US Army and also served four years in the US Navy. For many years, Paul was a self employed business owner in Wyoming County. He was a natural mechanic and carpenter. He enjoyed restoring older model vehicles and attending auto shows. In his leisure he enjoyed hunting trips to the cabin, golfing, traveling, camping, and NASCAR. Paul had numerous friends local and afar that he enjoyed spending time with talking and laughing. In addition to his parents he is also preceded in death by one son, Jimmy Burrell; three brothers; and two sisters. Those left to cherish his memory include his loving wife of 52 years, Ruby Burrell of Princeton; two sons, Stacy Burrell of New Richmond and Kenny Burrell and his wife, Rhonda of Mullens; five grandsons, Jamie of High Point, NC, Casey of Evans, WV, Jeffrey Coleman, Alex Burrell, and Jason Goad all of Mullens; one granddaughter, Randi Beth Burrell of Des Moines, IA; four great grandsons; two brothers, Len Burrell and his wife, Bobbie of Bud and Harless Burrell and his wife, Faye of Brenton; and two sisters, Debbie Stanley of Portsmouth, VA and Carrie Shrewsbury and her husband, Doug of Hurricane, WV. Memorial Service will be 7:00 P.M. Saturday, February 27, 2016 at Tankersley Funeral Home Chapel, Mullens with Pastor Eddie Crews officiating. Friends may call from 5:00 P.M. until time of service Saturday at the funeral home. Military rites will be conducted by the Wyoming County Honor Guard. In keeping with Paul's wishes, his body will be cremated. In lieu of flowers, the family requests donations of sympathy be made in his honor to the SECU Family House, 1970 Baldwin Lane, Winston-Salem, NC 27103 or Amedisys Hospice of Bluefield, WV. The family of Paul Burrell is being cared for by Tankersley Funeral Home, Mullens.

Paul Cornell Stacy Burrell, 78, of Princeton formerly of Wyoming County, ended his battle with cancer on February 24, 2016 at his residence surrounded by his family. Born December 18, 1937 at Micajah, WV, he was the son of the late Paul Edward... View Obituary & Service Information

The family of Paul C. Burrell created this Life Tributes page to make it easy to share your memories.

Send flowers to the Burrell family.