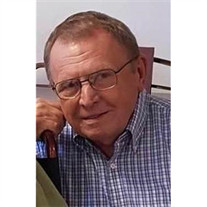 William Patrick McGhee was born February 5, 1946, in Roanoke, Virginia, son of the late William Cleveland and Marjorie Hazel Akers McGhee. Pat was a member of the Mullens High School class of 1964. He attended Marshall University, and received his bachelor's degree from the West Virginia Board of Regents. He taught in the Wyoming County school system, first as a traveling music teacher, then as a classroom teacher. He later worked for Twin Falls State Park and the West Virginia Department of Health and Human Resources. Pat was a life-long learner. He spoke French and Spanish fluently, and was conversant in German, Italian, and Portuguese. Most recently he enrolled in an online course at UCLA to study Russian. He put his knowledge to good use by serving as an online tutor for international students who were studying English. Pat was a gifted musician. He took organ lessons as a teenager, which he paid for with money he earned from his paper route. Years later, he became the organist at the Highland Avenue Baptist Church, and continued playing the organ there until the Sunday before his death. For many years, Pat conducted the Mullens Community Christmas and Easter Cantatas. In this past year, he served as the church secretary. It may well be that Pat's greatest work, and a work to which he felt called, was the tender loving care he provided to his mother in the waning years of her life. This he did with much skill and devotion, and his family is forever grateful. He is survived by his aunt BettyJean Ziegler of Richmond, Virginia; his siblings: Kathy Lyon and her husband Larry of Attica, Indiana; Timothy McGhee and his wife Cindy of Charleston, West Virginia; Susan McGhee of Bloomington, Indiana; and Anne McGhee and her partner Dennis Gallagher of Wilmington, Delaware; his nieces and nephews: Don Lyon and his wife Kathie of Greenwood, Indiana; Chad Lyon and his partner Chris Ginter of Indianapolis, Indiana; Megan McGhee DeRuiter and her husband Neil of Scott Depot, West Virginia; Annie McGhee and her husband Blake Gehringer of Seattle, Washington; Halley Pradell of Wilmington, Delaware and Ben Pradell of Wilmington, Delaware; his great-nephews and great-niece: John Lyon, Willie DeRuiter, and Cindy Gehringer; numerous cousins, including Barbara Warden and her husband Carter of Beckley, West Virginia; and as many friends as there are stars in the sky. A Service of Witness to the Resurrection will be held on Saturday, September 16, at 2:00pm, at the Highland Avenue Baptist Church, 319 Highland Ave., Mullens, West Virginia, with the Rev. Susan McGhee and the Rev. Shelly Barrick Parsons presiding. The family will welcome visitors an hour prior to the service, and at a light reception following the service. Many thanks to the staff of the Tankersley Funeral Home of Mullens, West Virginia, for their care and assistance. In lieu of flowers, memorial gifts may be made to the Highland Avenue Baptist Church, or to any cause or charity that seeks to work for the good of the human family. Online condolences may be expressed to the family at www.tankersleyfh.com. The family of Pat McGhee is being cared for by Tankersley Funeral Home, Mullens.

The family of Patrick McGhee created this Life Tributes page to make it easy to share your memories.

Send flowers to the McGhee family.