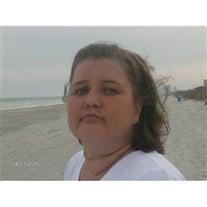 Pamela Lynn Cumby was granted her angel wings on January 22, 2015. Her final days were spent surrounded by family, friends, and a multitude of caring people at the University of Pittsburgh Medical Center. Pam was born on March 29, 1963 at Wyoming General Hospital, Mullens to Kathryn Franklin Cumby-Kelly and the late Charles "Buddy" Cumby. In 1981 Pam graduated from Mullens High School and worked as a certified Nursing Assistant. Pam's life would seem short to many but those who were touched by her understood the quality of existence far exceeds the quantity of time in which one lives. Her beautiful blue eyes and her warm smile brought so much joy to our family. Although exhausted by her battle with Crohns Disease, she gave us all such courage, hope, and reminded us of the preciousness of life. In addition to her father she is also preceded in death by her stepfather, Walt Kelly; nephew, Baby Harold; paternal grandparents, Lucille and Ed Cumby; and maternal grandfather, Claude Franklin. Pam is survived by her amazing and loving mother, Kathryn Cumby Kelly of Corinne; two brothers, Rick Cumby and his wife, Libby of Mullens and Steve Kelly and Connie Caron of Beckley; one sister, Belinda Shrewsbury and her husband, Harold of Beckley; maternal grandmother, "Nanny" Kathleen Franklin of Mullens; her son, Charles "Charlie" Martin; stepdaughters, Caitlyn and Jessica Davis; three grandchildren, Allannah, Davin, and Jesslyn; three nephews, Tyler Cumby, TJ Bennett, and Todd Shrewsbury; four nieces, Kasey Cumby, Tara Daniels, Brooke Shrewsbury, and Tabitha Johnson; and multiple aunts, uncles, and cousins. Services will be 12 Noon, Wednesday, January 28, 2015 at Tankersley Funeral Home Chapel, Mullens with Rev. Gilbert Dodson officiating. Burial will follow in Blue Ridge Memorial Gardens, Beckley. Friends may call Tuesday from 6:00 P.M. to 8:00 P.M. at the funeral home. Family and friends will serve as pallbearers. The family would like to send a special thank you to Dr. Pennathur and his team, 7-D Staff, and anyone else that assisted with Pamalama's care. Online condolences may be expressed to the family at www.tankersleyfh.com The family of Pamela Cumby is being cared for by Tankersley Funeral Home, Mullens.

Pamela Lynn Cumby was granted her angel wings on January 22, 2015. Her final days were spent surrounded by family, friends, and a multitude of caring people at the University of Pittsburgh Medical Center. Pam was born on March 29, 1963 at Wyoming... View Obituary & Service Information

The family of Pamela L. Cumby created this Life Tributes page to make it easy to share your memories.

Pamela Lynn Cumby was granted her angel wings on January 22,...

Send flowers to the Cumby family.