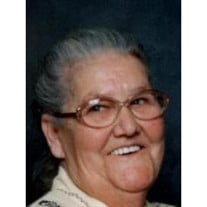 Opal Mae Morgan, 75, of Itmann, passed away on Wednesday, October 9, 2013 at her residence. Born January 10, 1938 at Simon, she was the daughter of the late Jason and Velvie Maynor Kennedy. Opal was a homemaker and a loving mother. She loved to sing, go to church, be with her family, and she thought there was nothing her grandkids could do wrong. In addition to her parents, she was also preceded in death by her husband, Ronald Odell Morgan; a son, Rodney Eugene Morgan; two grandsons, Vernal Eugene Hall and Jason Allen Hall; one great granddaughter, Angel Dawn Mullens; and two brothers, Humphrey Kennedy and Berthal (Mousie) Kennedy. Those left to cherish her memory include three sons, Larry Morgan and his wife, Joyce, of New Richmond, A. J. Morgan and his wife, Tammy, of Turkey Creek, and Vernal Eugene Hall and his wife, Sandy, of Bud; two daughters, LaQuetta Akers and her husband, Melvin, of Itmann and Marcella Carr of Itmann; four brothers, Albert Kennedy and his wife, Bernice, of Simon, Virgil Kennedy and his wife, Rita, of Simon, Greg Kennedy and his wife, Juanita, of Skin Fork, and Preston Kennedy and his companion, Angie, of Skin Fork; three sisters, Debra Hurley and her husband, James, of Rockview, Katherine Walls of Clear Fork, and Gloria Hanshaw and her husband, John, of Skin Fork; seven grandsons, Jamie, Shawn, C. J., Joshua, R. J., Brandon, and Tanner; six granddaughters, Samantha, Kayla, Chelsea, Amber, Christie, and Tiffany; seven great grandchildren; and three foster grandchildren that she loved like her own. Services will be 1:00PM Saturday, October 12, 2013 at the Tankersley Funeral Home Chapel with Reverend Lee Fisher and Brother Irvin Lee officiating. Burial will follow in the Jackson Curve Cemetery, New Richmond where she will be laid to rest beside her husband, son, and grandchildren. Friends may call from 6:00-9:00PM Friday at the funeral home. Nephews will serve as pallbearers. The family of Opal Morgan is being cared for by the Tankersley Funeral Home, Mullens.

Opal Mae Morgan, 75, of Itmann, passed away on Wednesday, October 9, 2013 at her residence. Born January 10, 1938 at Simon, she was the daughter of the late Jason and Velvie Maynor Kennedy. Opal was a homemaker and a loving mother. She loved... View Obituary & Service Information

The family of Opal M. Morgan created this Life Tributes page to make it easy to share your memories.

Opal Mae Morgan, 75, of Itmann, passed away on Wednesday, October...

Send flowers to the Morgan family.