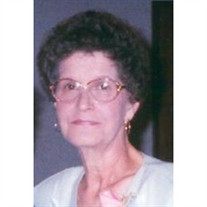 Ollie Margaret Poe, 73, of Stephenson went home to be with Jesus on Sunday, September 19, 2010 at her residence following a long-illness. Born November 19, 1936 at Basin, she was the daughter of the late David and Maxine (Lusk) McKinney. Ollie was a life-long resident of Stephenson, a member of the Corinne Pentecostal Church Of God, and a homemaker with a very loving and giving heart. In her leisure time she loved to garden, canning fresh food, cook, and spend time with her family and friends. A very loving wife to the late Jessie "June" Poe. In addition to her parents and her husband, she was also preceded in death by a son, David Poe; two daughters, Margaret McKinney and Diane Kennedy; a grandson, Stephen McKinney; and two sisters, Pauline Stewart and Louise McKinney. Those left to cherish her memory include a son, Roger Poe of Stephenson; a daughter, Elaine Massie of Maben; a daughter-in-law, Debbie Poe of Corinne; six sisters, Meldie Whitt and her husband, Bermon, and Nina Clay and her husband, Dallas, both of Beckley, Mable Wilson and her husband, Glenn, of Corinne, Cora Stewart of Matheny, Dorothy Adkins and her husband, George, of Mullens, Charlotte McKinney and husband, Danny, of Barker's Ridge; three brothers, David (Junior) McKinney and his wife, Wanda, and James McKinney and his wife, Kitty, both of Stephenson, and Elbert McKinney of Beckley; five granddaughters, April, Kimberly, Jessica, Amber, and Holly; six grandsons, Eric, Jessie Lee, Mark, Roger Lee, Josh, and David Michael; fifteen great-grandchildren; one great- great-grandson; and many nieces, nephews and numerous family and friends. Services will be 12 Noon Thursday, September 23, 2010 at the Tankersley Funeral Home Chapel with Rev. Vernon Sears officiating. Burial will follow in Blue Ridge Memorial Gardens, Beckley. Friends may call from 6:00 p.m.-8:00 p.m. Wednesday at the funeral home. Family and friends will serve as pallbearers.

Ollie Margaret Poe, 73, of Stephenson went home to be with Jesus on Sunday, September 19, 2010 at her residence following a long-illness. Born November 19, 1936 at Basin, she was the daughter of the late David and Maxine (Lusk) McKinney. Ollie... View Obituary & Service Information

The family of Ollie Margaret Poe created this Life Tributes page to make it easy to share your memories.

Ollie Margaret Poe, 73, of Stephenson went home to be with Jesus...

Send flowers to the Poe family.