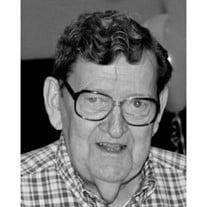 Morris Blaine Lusk, 85, of Itmann, WV, passed away peacefully Sunday, January 31, 2016 with his children by his side. Born June 19, 1930, at Herndon, WV, Morris was the 13th of 14 children born to the late John and Georgia Monk Lusk. After graduating from Herndon High School, Morris served in the US Air Force in Korea from 1951-1955 and was discharged as a Staff Sergeant. When he came home from the service, he worked for Mullens Grocery. In 1960, he graduated from barber school in Huntington, WV, and returned to Mullens to work with local barbers. In 1969, he opened and operated Lusk Barber Shop until his retirement in 2000. Morris was a faithful 50-year member of the Mullens Masonic Lodge #151 A.F. & A.M. serving as Worshipful Master on two occasions. Morris never met a stranger. He was quick-witted and always ready to share a joke or a story, and was blessed with a natural ability to play the piano. In his younger days, he devoted much of his time and energy to raising a garden every year on the family farm that he affectionately called "The Ponderosa." He loved to go rabbit hunting and thought there was nothing better than listening to his favorite beagle, 'Ol' Whitey" run a rabbit. In his later years, he enjoyed watching Mountaineer basketball and football games and Pittsburgh Pirates baseball games with his daughter. He was preceded in death by his wife, Joanna Riley Lusk in 1983, sisters, Hester Manning, Nola Brooks, Lebern "Till" Lusk, Garnet Lusk and Geva Byrd; and his brothers, Aven Lusk, Harold Lusk, Burless Lusk, Mason Lusk, Amos "Buzz" Lusk, and Harry Lusk. Those left to treasure his memory are his daughter, Terri Lee Lusk and companion, Doug Kennedy of Mullens, his son, Gregory Morris Lusk of Alpharetta, Georgia, two sisters, Melda Bridges of Thibodaux, LA, and Ilma Murray of Davison, MI; a host of nieces and nephews; his special companion, Margaret Goode of Gap Mills, WV, and many wonderful, caring friends and neighbors. Funeral services will be Thursday, February 4, 2016 at 11:00 am at the Mullens United Methodist Church with Reverend Lewis Arnold and Reverend Bill Goode officiating. Burial will follow at Blue Ridge Memorial Gardens, Beckley. Friends may visit with the family from 6 to 8 pm Wednesday and one hour prior to the services Thursday at the church. Members of the Mullens Masonic Lodge will serve as pallbearers. Masonic graveside rites will be conducted by Mullens Masonic Lodge #151 A.F. & A.M. Online condolences may be expressed to the family at www.tankersleyfh.com. The family of Morris Lusk is being cared for by Tankersley Funeral Home, Mullens.

Morris Blaine Lusk, 85, of Itmann, WV, passed away peacefully Sunday, January 31, 2016 with his children by his side. Born June 19, 1930, at Herndon, WV, Morris was the 13th of 14 children born to the late John and Georgia Monk Lusk. After graduating... View Obituary & Service Information

The family of Morris B. Lusk created this Life Tributes page to make it easy to share your memories.