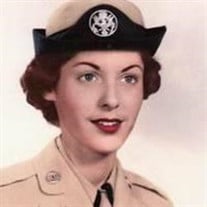 Millicent D. Smith, 76, daughter of the late William Travis Davis II and Ruth Wolford Davis of Mullens, West Virginia, passed away Monday, November 30, 2015 while in hospice care at the Veterans Affairs Community Living Center in Lexington, KY. Millicent was a 1957 graduate of Mullens High School and a veteran of the US Air Force. While serving in the United States Air Force from 1958-64, she was stationed in Lackland Airforce Base, Texas, and the Strategic Air Command in Omaha, Nebraska, where she specialized in both photography and cartography. After leaving the Airforce, Millicent fulfilled a lifelong dream of living in California. She began working at a Medical Clinic in Riverside, California, and then as an office manager for the City of Riverside. While in California, Millicent also worked as a print model, a hobby highlighted by coordinating fashion shows. Millicent returned to the Virginias and obtained an Associate's Degree in Business Management from Wytheville Community College before marrying and starting a family. Returning to Mullens to raise her three children, Millicent found great joy in service of her home community as a valuable asset with the Chamber of Commerce, Dogwood Committee, St. Andrew's Episcopal Church, the American Legion, and the American Red Cross. A proficient typist, Millicent was the proprietor of Smith's Secretarial Service and contributed to many publications and projects within the Wyoming County community. Of great significance to her was her work in editing for the Jack Feller project entitled "The History of Mullens, West Virginia." Her legacy will be carried on by two sons, Sergeant Major Raymond B. Smith currently serving in the Army and residing in Los Angeles, CA; William Quentin Smith and wife Megan, of Mount Hope, WV; and one daughter Michelle Rae Shepherd and husband Dewayne of Lexington, KY. She is also survived by one grandson, Aiden Shepherd, and one granddaughter, Quinn Smith, as well as, two siblings William Travis Davis III and Mary Becky Fulford, both of Mullens, WV. In addition to her parents, she is preceded in death by her sister Edith "Beth" Thompson. At her request, her body has been donated to science at Marshall University. We will honor her life at the St. Andrew's Episcopal Church (Little Brown Church) at 960 Guyandotte Ave. in Mullens, WV on Saturday, December 5, 2015. A short service will start at 12:30 PM and then will be followed by a reception in the fellowship hall. All friends and family will be welcomed joyously. Information submitted by Tankersley Funeral Home, Mullens.

The family of Millicent D. Smith created this Life Tributes page to make it easy to share your memories.

Send flowers to the Smith family.