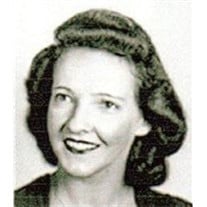 Mildred Juanita Shrader, 96, went to her heavenly home on April 14, 2012 at Glenwood Retirement Village, Princeton, WV. She was born in Tioga, West Virginia, on April 9, 1916, and was the fourth of five children born to Arthur Madison and Emma Hayhurst Bennett. At two and one-half years of age, her father died of pneumonia during the 1918 -1919 flu epidemic. She and her siblings were placed in homes in the surrounding area to be cared for by relatives and family friends. Even as a young child she was given responsibility for caring for the babies and young children of her host families and later assumed many of the responsibilities of running a household. In return for her services she was provided room, board and schooling. All of her education was received in one room schools which taught grades one through eight. Her uncle, Ernest Bennett, encouraged her to get a basic education and she graduated from the eighth grade at St. Mary's School in Webster County in 1930. She overcame an extra- ordinarily difficult childhood to become an exemplary wife, mother and church member. She found fulfilment in playing a supportive role in these three areas. She made major contributions in helping her husband, Carl, advance from his first job as a hostler at the Elmore roundhouse, to fireman and finally to engineer on the Virginian Railroad. Her efforts ranged from preparing a full breakfast and packing a lunch, often at 2 AM, to helping the family pull through an eighteen month period in 1938 when Carl was laid off and they moved back to his mother's farm in Princeton. Being an excellent seamstress, she made clothes for herself and her two daughters, including her younger daughter's wedding gown. She sewed for her home and made most of her own drapes and curtains. She was accomplished in needlecrafts, including quilting, crocheting and embroidery. She enjoyed gardening and canning fruits and vegetables for her family. She led by example and became a member of the First Church of God in Mullens in 1944 and was still a member when she died. She raised her family in the teachings of the Bible and insisted that her family participate in church activities. She served in several capacities in her Church including Sunday School Superintendent, Building Committee member, Board of Trustees member, and was a Sunday School teacher for twenty-five years. She was predeceased by her husband of fifty-nine years, Carl Shrader; a daughter, Patsy Shrader Miller Yates; her parents; two sisters, Gertrude Shrader and Ina Kenneda; two brothers, Glen and Fred; and a half-sister, Monoka McCoy Sublett. She is survived by a son, Gail and his wife, Lana, of Raleigh, NC; and a daughter, Barbara Cooke and her husband, John, of Chapin, SC. She also is survived by two grand-children, Dr. Stewart Cooke, MD of Columbia, SC and Erin Cooke of Lawrenceville, GA. She is also survived by four half-brothers and sisters; and a step-granddaughter, Victoria Vanover of Raleigh, NC. The family will receive friends at the Tankersley Funeral Home in Mullens from 6:00 to 7:30 PM on Monday, April 16, 2012. At 7:30 a brief service, officiated by Rev. Vondie Cook, Sr., will be held to celebrate Mildred's blessed life. Committal service and entombment will be 11 AM, Tuesday, April 17, 2012 at Blue Ridge Memorial Gardens Mausoleum Building #3, Beckley with Rev. Vondie Cook, Sr. officiating. She will be interred beside her husband, Carl. Those wishing to attend the committal service are asked to meet at the Mausoleum on Tuesday. The family expresses their appreciation to the staff and residents of Glenwood Retirement Village, Princeton, W.Va. for the loving care and friendship given to their mother over the years. The family of Mildred Shrader is being cared for by the Tankersley Funeral Home, Mullens, W.Va.

Mildred Juanita Shrader, 96, went to her heavenly home on April 14, 2012 at Glenwood Retirement Village, Princeton, WV. She was born in Tioga, West Virginia, on April 9, 1916, and was the fourth of five children born to Arthur Madison and Emma... View Obituary & Service Information

The family of Mildred J. Shrader created this Life Tributes page to make it easy to share your memories.

Mildred Juanita Shrader, 96, went to her heavenly home on April...

Send flowers to the Shrader family.