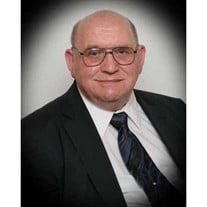 Melvin A. Lane, 85, of Bud Mountain, passed away on Thursday, April 17, 2020 at Bowers Hospice House, Beckley, following a long illness. He was the son of James and Minnie (Copeland) Lane of Belcher Mountain, who preceded him in death. He was Valedictorian of the 1953 class at Welch High School. He served his country in the United States Army. Additionally, he worked several jobs, with the last being at Mullens Grocery. He was ordained into the Gospel Ministry in 1966. He served as Pastor of the Guyandotte Baptist Church for over 30 years, where he was still a member. He loved his friends, his church, his family, his Bible, and most of all, his Lord. Those left to mourn his loss include his wife of 58 years, Pearl Elizabeth (Phillips) Lane; two sons, Melvin Arlen Lane, II and Nathan R. Lane all of Bud Mountain; three brothers, Claude (Janice) of Rural Retreat, VA, Robert (Janet) of Abingdon, VA, and Joel (Wanda) of Bluefield; two sisters, Gloria (Gerald) Pierce of Oak Ridge, TN and Nancy (Don) of Roanoke, VA; and many nieces and nephews. Due to the virus pandemic, there will only be a private graveside service and burial, 2:00 P.M., Sunday, April 19, 2020 at the Belle Colbird Cemetery, Bud Mountain with his son, Pastor Nathan Lane officiating. A public service may be arranged and announced at a future date. Per his request, no flowers should be sent. The family extends heartfelt thanks and appreciation to the staff of the Beckley VA Medical Center and Hospice, who cared for Melvin's health in the past few years. Online condolences may be expressed to the family at www.tankersleyfh.com. The family of Melvin A. Lane is being cared for by Tankersley Funeral Home, Mullens.

Melvin A. Lane, 85, of Bud Mountain, passed away on Thursday, April 17, 2020 at Bowers Hospice House, Beckley, following a long illness. He was the son of James and Minnie (Copeland) Lane of Belcher Mountain, who preceded him in death. He... View Obituary & Service Information

The family of Melvin Arlen Lane created this Life Tributes page to make it easy to share your memories.

Send flowers to the Lane family.