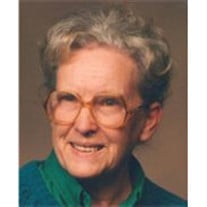 Mary Effie Smith Hardy, 79, of Sand Gap, died Wednesday, July 14, 2010, at Bowers Hospice House, Beckley following a long illness. Born December 22, 1930 at Dothan, she was the daughter of the late William and Bertha Likens Smith. Mrs. Hardy was a homemaker and a member of the Sand Gap Old Regular Baptist Church. She had been a resident of Sand Gap since the early 50's and was a former teacher at the Sand Gap One Room School that had grades one through six. In addition to her parents, she was also preceded in death by her husband, Eugene M. Hardy; a son, David Eugene Hardy; and two brothers, Howard and Delano Smith. Those left to cherish her memory include two daughters, Connie Shumate and her husband, Wayne, of Princeton and Mary Ann Taylor and her husband, Eric, of Barkers Ridge; a daughter-in-law, Teresa Hardy of Mullens; six sons, Kenneth Hardy and his wife, Barbara, of Amigo, Albert Hardy and his wife, Jennifer, of North Carolina, Steve Hardy and his wife, Andrea, of Mullens, James Hardy and his wife, Robin, of Beaver, Virgil Hardy and his wife, Vinita, of Rhodell, and John Hardy and his wife, Marlena, of Beckley; twenty grandchildren; ten great-grandchildren; three sisters, Rosie Mills of Peterstown, Louise Bishop and her husband, Willie, of Bradley, and Lorene Jones and her husband, Clinton, of Edmond; and one brother, Billy Smith of Kincaid. Services will be 1:00 P.M. Saturday, July 17, 2010, at Sand Gap Old Regular Baptist Church with Elder Bryce Phillips and Russell McCoy officiating. Burial will follow in the Milam Cemetery, Sand Gap. Following the committal service, family and friends will gather at the Hardy residence. Friends may call from 6:00-8:00 P.M. Friday at the funeral home and one hour prior to services at the church. Sons will serve as pallbearers. Honorary pallbearers will be Jimmy Manning and David Lane who were like her sons. The family wishes to express a special thanks to Tracy Lane for the care she gave to Mrs. Hardy. In lieu of flowers, donations of sympathy may be made to Bowers Hospice House, 454 Cranberry Drive, Beckley, WV, 25801.

The family of Mary E. Hardy created this Life Tributes page to make it easy to share your memories.

Send flowers to the Hardy family.