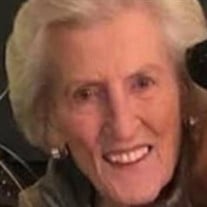 Mary Rose Campbell, 91, of Mullens, passed away peacefully on Sunday, December 12, 2021 at Bowers Hospice House, Beckley surrounded by her children. Born July 27, 1930, at Bulah, Kentucky, she was the daughter of the late Charles Celeste and Magdalena (Manzoni) Cassinelli. Mary was a homemaker, was the oldest out of six children, and was the last surviving member of her immediate family. After one year of college where she played women’s basketball, she returned back to Mullens to work in the Wyoming and Rialto Theaters. She was a lifetime member of Mullens, West Virginia and she had no desire to ever leave the town she loved and was a lifetime and dedicated member of the St. John’s Catholic Church in Mullens. When we pause to remember Mary, we remember how she was devoted to her husband, children, grandchildren, her church, and the town of Mullens. In addition to her parents, she is also preceded in death by her husband, Merlin Campbell; three sisters, Geneva McGovern, Virginia Cassinelli, and Elizabeth Kosco; and two brothers, Anthony and Alfred Cassinelli. Those left to cherish her memory include her three children, Janet Campbell Scott, Mary Frances McBride and her husband, Kenny, and John Merlin Campbell and his wife, Carla; her grandchildren, Kevyn Campbell McBride, Jordan McBride, Kent McBride, Robert Merlin Scott, Allison Scott, Luke Merlin Campbell, and Kirby Blake Campbell; her great grandchildren, Bryn and Graham Scott, Campbell and Bryce McBride, Charlotte and Olivia McBride, and Blair Merlin Campbell and several nieces, nephews, great nieces, and great nephews. Funeral Mass will be 1:00 P.M., Thursday, December 16, 2021 at the St. Francis De Sales Catholic Church, Beckley with Father Samuel Sacus and Father Jeremiah McSweeney officiating. Burial will follow in Blue Ridge Memorial Gardens, Beckley. Friends may call from 11:30 A.M. until time of service Thursday at the church. Pallbearers will be Kevyn McBride, Kent McBride, Rob Scott, Luke Campbell, Kirby Campbell, and Michael McGovern. In lieu of flowers, the family requests donations of sympathy be made to The City of Mullens Foundation, P.O. Box 266, Mullens, WV 25882 or to Bowers Hospice House, 454 Cranberry Drive, Beckley, WV 25801. Online condolences may be expressed to the family at www.tankersleyfh.com The family of Mary Campbell is being cared for by Tankersley Funeral Home, Mullens.

Mary Rose Campbell, 91, of Mullens, passed away peacefully on Sunday, December 12, 2021 at Bowers Hospice House, Beckley surrounded by her children. Born July 27, 1930, at Bulah, Kentucky, she was the daughter of the late Charles Celeste and... View Obituary & Service Information

The family of Mary Rose Campbell created this Life Tributes page to make it easy to share your memories.

Mary Rose Campbell, 91, of Mullens, passed away peacefully on...

Send flowers to the Campbell family.