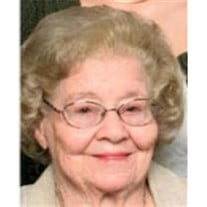 2 Timothy 4:7 I have fought a good fight, I have finished my course, I have kept the faith: Martha Pauline McKinney, 88, of Bud passed away on Wednesday, October 24, 2012 at Wyoming Nursing and Rehabilitation following a long illness. Born on August 11, 1924 at Itmann, she was the daughter of the late Harrison and Nancy (Sizemore) Sizemore. Martha was a member of the Bud Baptist Church, where she attended regularly when her health permitted, she was an active member of the Council on Aging Senior Citizens, at Itmann where she held many offices including President, was also a member of the Silver Hair Legislature where she enjoyed socializing with the members and learning about the current events. Martha enjoyed gardening, working in her flowers, and especially enjoyed spending time with her family and friends. In addition to her parents, she was preceded in death by her beloved husband of 39 years, Cornell McKinney; two brothers, William H. (Bill) Sizemore and Emmett Sizemore; and two sisters, Virginia McKinney and her infant twin sister, Mary Sizemore. Those left to cherish her memory include two daughters, Sharon (Hope) Hall and her husband, Randal,l of Bud and Bonnie O'Neal and her husband, Homer, of Spanishburg; granddaughters, Sheila Harman and her husband, Steven, of Shady Springs, Amanda Rutten and her husband, Patrick, of Saulsville, and Tina Spicer and her husband, Anthony, of Peterstown; grandsons, Anthony O'Neal and his wife, Teri, of Orlando, FL and Alex O'Neal and his wife, Patti, of Pearisburg, VA; several great-grandchildren, two of which were very special and lights of her life, Peyton and Morgan Rutten; one brother, Harrison Sizemore and his wife, Dora, of Princeton; two sister-in-laws, Beaulah Hill and Della Farmer; and numerous nieces and nephews. Services will be 1:00 P.M. Saturday, October 27, 2012 at the Tankersley Funeral Home Chapel with Rev. Gilbert Dodson officiating. Burial will follow in Palm Memorial Gardens, Matheny. Friends may call Friday from 6:00 to 8:00 P.M. at the funeral home and one hour prior to services Saturday. Pallbearers will be Kester McKinney, Ronnie McKinney, Steven Harman, Patrick Rutten, Harrison (Butch) Sizemore, Wayne Sizemore, William Young, Alex O'Neal and Honorary Pallbearer will be Carmel Hill. The family would like to give a special thanks to the Wyoming Nursing and Rehabilitation Center and Faye Bailey, her friend and roommate.

2 Timothy 4:7 I have fought a good fight, I have finished my course, I have kept the faith: Martha Pauline McKinney, 88, of Bud passed away on Wednesday, October 24, 2012 at Wyoming Nursing and Rehabilitation following a long illness. Born... View Obituary & Service Information

The family of Martha P. McKinney created this Life Tributes page to make it easy to share your memories.

Send flowers to the McKinney family.