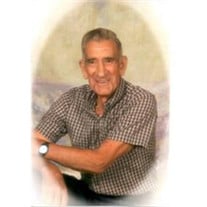 Mart "Papaw" Lane, 84, of Bud Mountain went to be with his Lord on May 26, 2013 at his home following a long illness. Mart was born September 23, 1928 on Bud Mountain to the late Henry and Sarah Tolliver Lane. He was a lifelong resident of Bud Mountain where he worked in the timber industry. He also worked for the City of Mullens. He was a devoted husband, dad, papaw and granddad. Mart was a living example of an honorable gentleman. His word and a handshake were the only contract he ever needed. "Big Mart" was well known as a handy man and a farmer. He fixed numerous lawnmowers and chainsaws for neighbors and was always tending to his lawn. After a hard day of work, he could be found relaxing on his front porch with his wife, playing with his dogs, listening to bluegrass music and visiting with friends. In addition to his parents, he was preceded in death by an infant daughter, Mary Jane Lane; a brother, Amos Lane; sisters, Bertie Mullins, Dolly Buchanon, Carrie Dunford and Bethel Lane; and a daughter-in-law, Deborah Hale Lane. Survivors left to cherish Mart's memory include his wife of 62 years, Laura Irene McComas Lane; a brother, Walter Lane of Hanover, WV; a son, Nelson Lane of Herndon, WV; a daughter, Rachel Lane of Ararat, VA; four grandchildren, Bradley Mart Lane of Princeton, WV, Laura Irene Spurlin and husband, Caleb, of Ararat, NC, Misty Dawn Lane of Fayetteville, WV and Nikita Li' Lester of Alpoca, WV; two great- grandchildren, Kayleigh and Kadeveyan Kenney; and a number of nieces, nephews and friends. Services will be 1:00 P.M. Thursday, May 30, 2013 at the Tankersley Funeral Home Chapel with Rev. Larry England and Rev. Dalley Maynard officiating. Mart's final resting place will be the Moran Cemetery on Bud Mountain, WV. Friends may call from 6:00 to 8:00 P.M. Wednesday at the funeral home. A dinner will follow at Charity Baptist Church of Mullens after the burial. In lieu of flowers, the family asks that donations be made to the American Cancer Society in care of Appalachian Eye Care, 700 Oakvale Rd, Princeton, WV 24740. Family and friends will serve as pallbearers. The Lane family is being cared for by the Tankersley Funeral Home, Mullens.

Mart "Papaw" Lane, 84, of Bud Mountain went to be with his Lord on May 26, 2013 at his home following a long illness. Mart was born September 23, 1928 on Bud Mountain to the late Henry and Sarah Tolliver Lane. He was a lifelong resident of... View Obituary & Service Information

The family of Mart Lane created this Life Tributes page to make it easy to share your memories.

Send flowers to the Lane family.