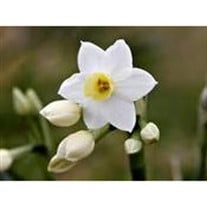 Mamie Sue Weaver, 80, passed away on Sunday, March 3, 2013 in a Beckley hospital following a long illness. Born November 21, 1932 at White Top, Virginia, she was the daughter of the late Jim and Mamie Alvertie Hensley Woodby. Mamie was a homemaker,... View Obituary & Service Information

The family of Mamie Sue Weaver created this Life Tributes page to make it easy to share your memories.

Send flowers to the Weaver family.