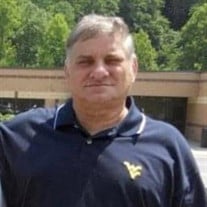 Lynndall Wayne Dunn, 76, of Bud Mountain, passed away on Sunday, March 6, 2022 doing what he loved best, collecting firewood. Born September 25, 1945 at Peterstown, he was the son of the late Homer Allen and Janice (McLaughlin) Dunn. Lynndall was a devoted husband and father to his wife, Kaye and his children, Teresa and Anthony. Lyndall enjoyed spending time with his grandchildren and great grandchildren. In his leisure he enjoyed being outside in his garden and collecting firewood. He was a former coalminer with 42 years of service, having worked at Herndon, and retiring from U.S. Steele at Pinnacle. He was a member of UMWA and was a U.S. Army Veteran having served in Alaska during the Vietnam Era. Lynndall was a friend to all and will be greatly missed by his family and friends. In addition to his parents, he is also preceded in death by his sisters, Debbie Dunn and Sue Gilbert; and brothers, Eddie and Richard Dunn; and a infant sibling. Those left to cherish his memory include his loving wife, Kaye Dunn; one daughter Teresa White of Florida; one son, Anthony Dunn of Bud; two grandchildren; six great grandchildren; three sisters, Mona Dunn of Hilltop, Emogene Rice and her husband, Jackie of Texas, and Patty Ball and her husband, Joey of Princeton; and two brothers, Larry Dunn and his wife, Lana of Bud and Danny Dunn and his wife, Cathy of Beckley. Services will be 12 Noon, Saturday, March 12, 2022 at Tankersley Funeral Home Chapel, Mullens with Rev. Jerry Otey officiating. Entombment will follow in Blue Ridge Memorial Gardens, Beckley. Friends may call from 10:30 A.M. until time of services Saturday at the funeral home. Family and friends will serve as pallbearers. Online condolences may be expressed to the family at www.tankersleyfh.com. The family of Lyndall Dunn is being cared for by Tankersley Funeral Home, Mullens.

Lynndall Wayne Dunn, 76, of Bud Mountain, passed away on Sunday, March 6, 2022 doing what he loved best, collecting firewood. Born September 25, 1945 at Peterstown, he was the son of the late Homer Allen and Janice (McLaughlin) Dunn. Lynndall... View Obituary & Service Information

The family of Lynndall Wayne Dunn created this Life Tributes page to make it easy to share your memories.

Lynndall Wayne Dunn, 76, of Bud Mountain, passed away on Sunday,...

Send flowers to the Dunn family.