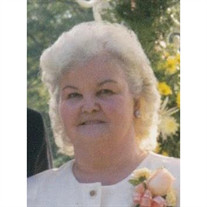 Lillian Joyce Lusk, 89, of Mullens, passed away on Tuesday, February 6, 2018 at Bowers Hospice House, Beckley. Born April 19, 1928 at Tolleytown, she was the daughter of the late Ira Walter and Mary (King) Snyder. Lillian was a homemaker, member of the Bud Missionary Baptist Church, and member of the Eastern Star in Mullens. In her leisure she enjoyed spending time with family, camping, reading, and listening to Gospel music. In addition to her parents she is also preceded in death by her husband, Troy "Chief" Lusk; one son, Albert Lusk; one granddaughter, Teresa Lusk; four brothers, Kenneth, Ray, Ira(Bud), and Lewis; and two sisters, Mildred Whitt and Marie Lusk. Those left to cherish her memory include her eight children, Judy Shumate (Vincent), Connie Sparks, Sandra Taylor (Gary Clark), Kathy Hylton (Mark), Eva Lusk, Peggy Lusk, Thomas Lusk (Ethel), and Roger Lusk (Freida); she was maw maw Chief to many grandchildren; she was GG to many great grandchildren; one great- great grandchild; her twin brother, James Snyder of Williamsburg, VA and Jack Snyder of Delaware; and numerous nieces and nephews. Services will be 1:00 P.M. Saturday, February 10, 2018 at the Bud Missionary Baptist Church, Bud with Rev. Tom Lusk and Rev. Lewis Arnold officiating. Burial will follow in the Lusk Cemetery at the Lusk Settlement. Friends may call one hour prior to services Saturday at the church. Pallbearers will be Vincent Shumate, Mark Hylton, Gary Clark, Willie Lusk, Larry Presley, Seth Presley, Chase Presley, Andy Hall, and David Boothe. The family would like to express a heartfelt thanks to the Wyoming County Council on Aging and Dara Johnston for the care that was shown to Lillian. Online condolences may be expressed to the family at www.tankersleyfh.com. The family of Lillian Lusk is being cared for by Tankersley Funeral Home, Mullens.

Lillian Joyce Lusk, 89, of Mullens, passed away on Tuesday, February 6, 2018 at Bowers Hospice House, Beckley. Born April 19, 1928 at Tolleytown, she was the daughter of the late Ira Walter and Mary (King) Snyder. Lillian was a homemaker,... View Obituary & Service Information

The family of Lillian Joyce Lusk created this Life Tributes page to make it easy to share your memories.

Lillian Joyce Lusk, 89, of Mullens, passed away on Tuesday, February...