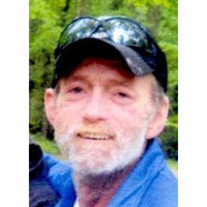 Larry Dean Thornton, 52, of Bud passed away Sunday, September 30, 2012 at his residence following a short illness. Born December 1, 1959 at Mullens, he was the son of the late Bernard Melvin Thornton, Jr. and Betty Maxine (Alley) Thornton. Larry was a Masonary Mason having worked most of his career in construction and he was a former employee of Talon Manufacturing. In his leisure he enjoyed hunting and playing horse shoes. In addition to his parents, he was also preceded in death by a sister, Linda Gwinn; and three brothers, Greg Thornton, Robert Benji Thornton, and an infant brother, Bernard Melvin Thornton, III. Those left to cherish his memory include his loving wife of 28 years, Dorothy Ann Graham Thornton; two sons, Larry Dean Thornton, Jr. at home and his son, Jarred and Derek Lee Thornton at home; one sister, Tina Campbell and her husband, Robert Jake, of Corinne; two brothers, Donald Thornton and his wife, Betty, of Covel and Mark Thornton and his wife, Marie, of Florida; his mother and father-in-law, Patricia Graham, of Basin and the late Arthur Graham; and several nieces and nephews. Services will be 8:00 P.M. Thursday, October 4, 2012 at Tankersley Funeral Home Chapel with Rev. Larry England officiating. Friends may call from 6:00 to 8:00 P.M. Thursday at the funeral home. In keeping with Larry's wishes cremation will follow. Arrangements have been entrusted to the Tankersley Funeral Home, Mullens.

The family of Larry Dean Thornton created this Life Tributes page to make it easy to share your memories.

Send flowers to the Thornton family.