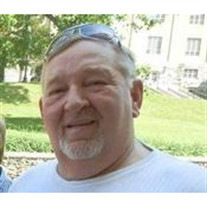 Rev. Larry David Lafferty, 60, of Mullens passed away Thursday, May 16, 2013 at his home after a short illness. Born February 15, 1953 in Mullens W.Va., he was the son of the late Howard and Peggy Broyles Lafferty. Larry graduated from Mullens High School in 1970. He was elected into the Hall of Fame on August 18, 1990. Larry was a coal miner for 18 years at Eastern Coal. After leaving the coal mines he was called to the ministry in 1987. He received his Bachelor of Theology and was ordained into the Wesleyan Church in 1989. Larry pastored the Cuzzart Wesleyan Church in Bruceton Mills, WV and the Mullens Wesleyan Church in Mullens, WV until his death. After his love for his church and family he enjoyed hunting, fishing and football. In addition to his parents, he was preceded in death by two sisters, Tamela Lafferty Cline and Robin Lafferty Runion. Those left to cherish his memory include his loving wife of 38 years, Teresa Lafferty; two sons, Larry Lafferty, Jr. and his wife, Linda, of Myrtle Beach, SC and Eric Lafferty and his wife, Tabitha, of Harrisonburg Va.; two daughters, Christy Lafferty Salters of Myrtle Beach, SC and Kim Lafferty Cummings of Lexington, Va.; two sisters, Donna Lafferty Campbell and her husband, Billy, and Brenda Lafferty McKinney, both of Yadkinville, NC; one brother, Wesley Lafferty and Mindy of Flat Top, WV; nine grandchildren; two great- grandchildren; and a host of nieces, nephews, and friends. Services will be at 12:00 Noon Monday, May 20, 2013 at the Tankersley Funeral Home Chapel with the District Superintendent Rev. Gregory Reynolds, Rev. Robert W. (Bob) Phaup and Doug Thorn officiating. Burial will follow in Blue Ridge Memorial Gardens, Beckley. Friends may call Sunday from 6:00 P.M. to 8:00 P.M. at the funeral home. Pallbearers will be members of the Wyoming East Football Team. The family wants to express a special thank you to nephew, Wesley Lafferty. The family of Rev. Larry David Lafferty is being cared for by the Tankersley Funeral Home, Mullens.

Rev. Larry David Lafferty, 60, of Mullens passed away Thursday, May 16, 2013 at his home after a short illness. Born February 15, 1953 in Mullens W.Va., he was the son of the late Howard and Peggy Broyles Lafferty. Larry graduated from Mullens... View Obituary & Service Information

The family of Larry D. Lafferty created this Life Tributes page to make it easy to share your memories.

Send flowers to the Lafferty family.