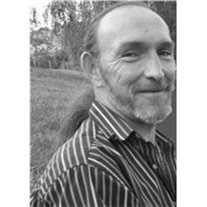 Larry Eugene Bolen, 50, of South Charleston formerly of Wyco went home to be with the Lord on Wednesday, October 13, 2010 after a short illness. Born May 14, 1960 in Freeburn, KY he was the son of the late Harold "Shorty" and Lorrene (Daughtery) Bolen. Larry grew up in Wyco with his siblings, 25 years ago he united with his soul mate, Judith M. Wingate, originally from Mullens, they joined in marriage on May 14, 1989 in the presence of family and friends, they enjoyed many happy years in Mullens where Larry was a self- employed contractor before relocating to South Charleston. In addition to his parents, he was preceded in death by a brother, Vernon Bolen. Those left to cherish his memory include his loving wife, Judith M. Wingate Bolen; his children Jessica Fowler and her husband, Elbert, of Charleston, Frances Lovejoy of South Charleston, Travis DeHart of VA, and Michael Reed and his wife, Taletha, of Beckley; nine grandchildren, Nathan and Morgan Fowler, Kelsey, Paige, and Ryder Lovejoy, Michael Jr., McKenzie, Christian and Zander; one sister, Venita Johnson and her husband, Jerry, of Corrine; three brothers, Glen Bolen and his wife, Valerie, of Falmouth, KY, Eddie Bolen and his wife, Shirley, of Wyco, and Roger Bolen and his wife, Lois, of Iaeger; a sister-in-law, Faye Wingate of Charleston; two brothers-in-law, David Wingate and his wife, Kim, of Charleston and Earl Gratton Wingate and his wife, Heather, of Morgantown; and many nieces and nephews. Services will be 2:00 p.m. Sunday, October 17, 2010 at Tankersley Funeral Home Chapel with Rev. Butch Accord officiating. Friends may call one hour prior to services Sunday at the funeral home. In keeping with Larry's wishes his body will be cremated. For those considering an expression of sympathy, the family requests contributions to help defray unexpected expenses be made to Tankersley Funeral Home, 102 Moran Avenue, Mullens, WV 25882.

Larry Eugene Bolen, 50, of South Charleston formerly of Wyco went home to be with the Lord on Wednesday, October 13, 2010 after a short illness. Born May 14, 1960 in Freeburn, KY he was the son of the late Harold "Shorty" and Lorrene (Daughtery)... View Obituary & Service Information

The family of Larry E. Bolen created this Life Tributes page to make it easy to share your memories.

Send flowers to the Bolen family.