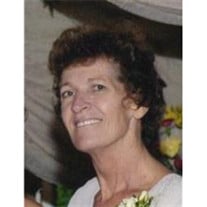 Kathleen "Kathy" Clark, 59, of Itmann passed away Sunday, March 11, 2012 at her residence following a long illness. Born November 17, 1952 in Chicago, IL, she was the daughter of the late Joseph and La'Verne Rice O'Connor. In addition to her parents, she was also preceded in death by her father and mother-in-law, Lester and Ethel Clark; two sisters, Joanne Huffman and Geraldine Culbertson; and four brothers, Dennis O'Connor, Timothy O'Connor, Terry O'Connor and Joseph O'Connor. Those left to cherish her memory include her husband, Gary Clark; two children, Shannon Clark and his wife, Valerie, of Palmer, Alaska and Leslie Garretson and her husband, J.R. of Itmann; two grandchildren, Lucas and Devon Clark of Palmer, Alaska; two sisters, Noreen Strazzante and Linda Kondelik,both of Illinois; and one brother, Daniel O'Connor of Illinois. The love story of Gary and Kathy began in 1970, when Gary left West Virginia on an adventure. Gary and a friend took off to Illinois looking for something new and interesting. Well, Gary found that in Kathy. They quickly fell in love and the story wrote itself. They were married in September of 1971, and Shannon Brady, their first son came soon after. They lived in Lockport, IL for 3 years, before moving back to Itmann, WV. After moving back to Itmann, they had a daughter in 1981, named Leslie Erin. Kathy was a homemaker. Gary built the family a cabin on the Greenbrier River where the family would spend their summers. There was no greater joy that mom had in life than tubing down the white waters of that river. Kathy would stay for days on end with nothing to do but swim, fish, and relax in the company of family and friends. She loved the beach and taking trips back up to Illinois to see her family. The devotion and love that Kathy gave to her husband, children, family and friends was immeasurable. She was diagnosed with Huntington's Chorea in 1999, and fought a long battle with this disease. Gary retired from U.S. Steel to take care of her in their home. He has been devoted, unconditionally to her. Many, many people have lovingly helped Gary. There have been many special people in her life that have been there every step of the way, calling and visiting every day and many nights, helping with ANY and EVERY triumph and tribulation we have faced include: Junior Clark, Barbara Griffith, Kay Marcum, JR Garretson, Kayla and Kyleigh Martin, Kellie Dye. Without these people, we truly and honestly would not have been able to provide the wonderful, loving, peaceful environment that Kathy lived in every day. They are angels. Services will be 12 Noon, Thursday, March 15, 2012 at the Tankersley Funeral Home Chapel with Pastor Bob Meadows and Rev. Lewis Arnold officiating. Burial will follow in Blue Ridge Memorial Gardens, Beckley. Friends may call from 6:00 to 8:00 p.m. Wednesday at the funeral home and one hour prior to services on Thursday. Pallbearers will be Harvey Clark, Jr., James Seaton, Terry Caperton, Chris Clark, J.R. Garretson, and Kyle Martin. The family would like to thank the special caregivers, Barbara Griffith, Gaynell Shrewsbury, and Hospice of Southern West Virgina. Arrangements have been entrusted to the Tankersley Funeral Home, Mullens, W.Va.

Kathleen "Kathy" Clark, 59, of Itmann passed away Sunday, March 11, 2012 at her residence following a long illness. Born November 17, 1952 in Chicago, IL, she was the daughter of the late Joseph and La'Verne Rice O'Connor. In addition to her... View Obituary & Service Information

The family of Kathleen Clark created this Life Tributes page to make it easy to share your memories.

Send flowers to the Clark family.