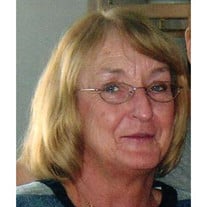 June K. Burgess Hunter June Kay Burgess Hunter, 70, of Mansfield, OH, formerly of Clear Creek, WV and Charleston, WV, passed away on Friday, August 18, 2017 at her home. June slipped away in her sleep and went home to the hills of her native West Virginia. June's health had been in decline for the past 2 years. June was born on May 31, 1947 at Clear Creek and was the daughter of the late Chris and Nonearl Miller Burgess. She was a 1965 graduate of Clear Fork High School. Following graduation June worked as a secretary for UMWA Field Office in Charleston. June had been a resident of Mansfield since 1984 and was last employed by Callahan Overhead Door Company in Lexington, OH. She was a member of Cook Road Baptist Church, Mansfield and had been a member of Alcoholics Anonymous since November 13, 2009. June always treasured the values and morals given her by her parents when she was raised on the family farm. In her leisure, she enjoyed spending time with family and friends, especially her feline companions. Those left to cherish her memory include her former spouse, with whom she made her home, Michael Hunter; her step daughters, Jody and Jeremy Logan, Signal Mountain, TN, Amy and Tim Mount, Chattanooga, TN; five step grandchildren, Jade Logan, Joslin Logan, Kyle Mount, Ryan Mount, and Noah Mount; her sisters, Del Wood, Beckley, WV and Connie Maynor and her husband, Lonnie of Beckley, WV; her three brothers, Raymond Miller, Mountain Home, ID, Russell and Mary Ann Burgess, Montcoal, WV, and Jimmy and Lois Burgess, Waverly, NY; and sisters-in-law, Phylllis Burgess, Beckley, WV, and Lulabelle Burgess, Farmington, WV. She is also survived by 36 nieces and nephews and a whole "holler-full" of great nieces and great nephews; and her last living aunt, Dealrene Pettry, of Beckley, WV. In addition to her parents, she is also preceded in death by her sister, Betty Brookover and brothers, Thomas Burgess, Wilson Burgess, and Sebert Burgess. Committal service and burial will be held at 1:00 P.M. on Monday, August 28, 2017 at Blue Ridge Memorial Gardens, Beckley, Mausoleum Building #3 with Rev. Arolette Stover officiating. Friends may call one hour prior to services on Monday at the Mausoleum. Care for June will be completed by her nephew and Funeral Director, David L. Wood, II of Tankersley Funeral Home, Mullens and her Great Nephew, Jonathan D. Wood of Tyree Funeral Home, Oak Hill and her Great Niece, Brianna L. Wood of Tankersley Funeral Home, Mullens. Online condolences may be expressed to the family at www.tankersleyfh.com.

June K. Burgess Hunter June Kay Burgess Hunter, 70, of Mansfield, OH, formerly of Clear Creek, WV and Charleston, WV, passed away on Friday, August 18, 2017 at her home. June slipped away in her sleep and went home to the hills of her native... View Obituary & Service Information

The family of June Kay Hunter created this Life Tributes page to make it easy to share your memories.

Send flowers to the Hunter family.