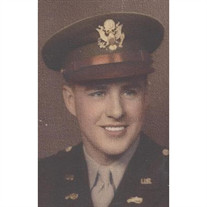 John Philip Tice, 98, of Charleston formerly of Mullens, passed away on Friday, March 20, 2015 at the home of his daughter and son-in-law in Dunedin, FL while wintering in Florida. Born November 5, 1916 in Hazard, Kentucky, he was the son of the late Philip and Katherine (Hayes) Tice. Mr. Tice grew up in nearby Blackey. A natural athlete, he attended Davidson College (Class of 1939) in North Carolina with an initial intention of playing baseball, and ended up playing four years on the varsity basketball team. Upon graduation, he set the obstacle course record at Fort Hood, Texas. An avid golfer, he won many tournaments over the years and played until the age of 93. He was a US Army Veteran having served during World War II as the commanding officer of Company B, 610th Tank Destroyer Battalion and fought in the Battle of the Bulge. Highly decorated for valor, he received the Bronze Star, the Purple Heart, and the Distinguished Service Cross and was honorably discharged at the rank of Major. Moving to Mullens, W. Va. in 1949, he managed Union Power Company and the Mullens Water Works for 32 years. During that time he gave back to his community in countless ways though his involvement with Rotary, The American Red Cross, The American Legion, and the First Presbyterian Church where he served as a long standing elder. A dining hall at Davidson College is named in honor of Mr. Tice's behind-the-scenes contributions to his community through a financial contribution from Dr. Florian Vaughan of Mullens. In addition to his love for Mullens was his deep love for nearby Twin Falls State Park where he was a daily presence for many years. In addition to his parents John was preceded in death by his wife, Margaret Peggy Gilliam Tice; his son, Jimi Tice; his brother, Jim Tice; and his sisters, Martha Washburn, Dorothy Alcorn, and his twin, Mabel Tice. Those left to cherish his memory include his son, John Tice, Jr. (Judy) of Pensacola, FL; and his daughter, Pam Newman (Bud) of Charleston and Dunedin, FL; two granddaughters, Jenny Breen (Pete) and Leslie Tice (Craig); and one great granddaughter, Avery. The family would like to thank special care givers over the years including Carol, Tammy, Cindy, Maria, Lola, Dr. Al Phister (WV), Dr. Timothy Light (FL) and also Suncoast Hospice for their excellent support and care. Services will be 12 noon, Friday, March 27, 2015 at the First Presbyterian Church of Mullens with Rev. Tracy French officiating. Friends may call one hour prior to services Friday at the church. Graveside services and burial will be 4:00 P.M. Friday, March 27, 2015 at the Maplewood Cemetery, Tazewell, Virginia with Military Graveside rites being conducted by Barns and Beavers VFW Post 7136 Tazewell, Virginia. Family and friends will serve as pallbearers. In lieu of flowers, donations may be made to First Presbyterian Church, Howard Avenue, Mullens, WV 25882; Alzheimer's Association, 1601 2nd Avenue, Charleston, WV 25387; or Suncoast Hospice Foundation 5771 Roosevelt Blvd, Clearwater, FL. 33760-9962. Online condolences may be expressed to the family at www.tankersleyfh.com. The family of John Tice is being cared for by Tankersley Funeral Home, Mullens.

John Philip Tice, 98, of Charleston formerly of Mullens, passed away on Friday, March 20, 2015 at the home of his daughter and son-in-law in Dunedin, FL while wintering in Florida. Born November 5, 1916 in Hazard, Kentucky, he was the son of... View Obituary & Service Information

The family of John P. Tice created this Life Tributes page to make it easy to share your memories.

Send flowers to the Tice family.