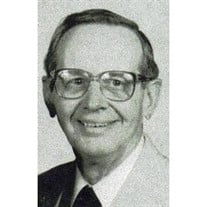 John W. "Jack" Feller, 90, died peacefully on May 2, 2013, at his home on 12 Ridgeview Drive, Mullens. He was a lifelong resident of Mullens, except for the time he was a student at West Virginia University, serving his country in the US Army Air Corps during World War II, and working for several insurance companies. Jack was born on November 21, 1922 in Beckley. He was the son of the late Charles Vic Feller and Genevieve Wyand Feller. In addition to his parents, he was preceded in death by his deeply loved first wife of 58 1/2 years, Margaret E. "Peggy" Cullington Feller, who died in 2008 and an older brother, Captain Charles Harry Feller, an Army Air Corps pilot killed in action in France in 1944 during World War II. The family he leaves behind includes his loving and devoted wife, Marion Brooks Feller; sons, Charles T. Feller and his wife, Victoria, and John Steven Feller, all of Mullens; and grandchildren, Derek S. Feller and his fiancée, Kayla Vaught, Brent T. Feller and Logan Marie Feller Collinsworth and her husband, Andrew, all of Beckley. Jack graduated from Mullens High School in 1940 where he lettered in football and baseball. He then attended West Virginia University until 1942 when he enlisted in the US Army Corps, rising to the rank of Staff Sargent, serving with the Eighth Air Force in England and then with the Ninth Air Force in occupied Germany. (Jack and his family made numerous trips back to his Debach, England air base where he was instrumental in the reconstruction of the control tower, where he served.) He then returned to WVU where he graduating in 1948 and then worked for several insurance companies before returning to Mullens in 1952 to join his father in the CV Feller Insurance Agency until he retired in 1982. Jack was a lifelong member of the First Presbyterian Church of Mullens where he served as Deacon, Elder, and Clerk of Session. For over six decades he was a member of Masonic Lodge #151 AF&AM, Beni Kedem Shrine, American Legion Post # 106, Lions Club, Loyal Order of the Moose, Veterans of Foreign Wars Post #8238, and Mullens Area Chamber of Commerce. Active in community service Jack served as Secretary of the Wyoming County Airport Authority while it was being built, director of the Coal Field Expressway, and Davis Stewart Orphanage as well as Little League and American Legion baseball programs. After compiling and writing numerous books on the history of Mullens, Jack was named a West Virginia History Hero and a local railroad museum is named in his honor. Funeral services will be 12:00 Noon, Sunday, May 5, 2013 at the First Presbyterian Church of Mullens with Rev. Tracy French officiating. Interment will follow at Sunset Memorial Park Memorial Mausoleum, Beckley. The family will receive visitors from 6:00 P.M. to 8:00 P.M. Saturday, May 4, 2013 at the church and one hour prior to services Sunday. Members of Mullens Masonic Lodge #151 will serve as pallbearers. Honorary pallbearers will be Carl Green, WIlliam "Sarge" McGhee, Lewis D'Antoni, Bill Lester, Orion Morgan, John Tice, Ray Roop, Morris Lusk, Joe Hill, and Joe Parsons. In lieu of flowers, donations of sympathy may be made to the First Presbyterian Church of Mullens P.O. Box 826 Mullens, WV 25882. The family of John "Jack" Feller is being cared for by Tankersley Funeral Home, Mullens.

John W. "Jack" Feller, 90, died peacefully on May 2, 2013, at his home on 12 Ridgeview Drive, Mullens. He was a lifelong resident of Mullens, except for the time he was a student at West Virginia University, serving his country in the US Army... View Obituary & Service Information

The family of John W. Feller created this Life Tributes page to make it easy to share your memories.

Send flowers to the Feller family.