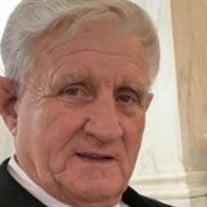 Jesse P. Massie, of Mullens, WV passed away on November 15, 2021, following a short illness. He was born on May 13, 1947, in Glen Rogers, WV to the late Frank and Sarah Annie Massie. Jesse was the last remaining member of his immediate family. In addition to his parents, he is preceded in death by siblings Zelma Daniels, Maude Sizemore, John Massie, Ellen Maraschillo, Edna Kmet, Peggy Sesco, Frank Massie and Gillis Massie. Jesse spent most of his life in Wyoming County. He was a 1965 graduate of Mullens High School and served in the Army. He retired from the coal industry. In times of better health, he enjoyed hunting, fishing, four-wheeling, and spending time at his camp at Second Creek. He was an avid fan of WVU athletics and any team associated with his grandchildren. He enjoyed attending church and was a longstanding member of Pierpoint Freewill Baptist Church. He was very devoted to and proud of his family. If you spent any time with him, you’ve likely heard stories about his daughters and especially his grandchildren. Affectionately known as “Papaw Jess” or “Pops,” he was a girl dad and grandpa extraordinaire. His later years were filled with Barbie Dolls and limitless tea parties, as he shaped memories with his beloved great-granddaughters, Peyton and Karsyn. He will be greatly missed by those he loved so dearly. Survivors include his wife, Jerri and daughters, Jennifer Chandler of Crab Orchard, Teresa Workman and husband Randy of Daniels, and Angela Johnson and husband Scott of Mullens. Special nephew, Gene Massie of Mullens, Grandchildren: Justin Chandler and wife Leya of Beckley, Kyndl, Chandler and Broc Johnson of Mullens, Alysia Chandler-Kozlowski of Portland, OR and Great-Granddaughters: Peyton and Karsyn Chandler of Beckley. Many nieces and nephews also survive. The family would like to express their gratitude to Reverend Butch and Kathy Acord and the congregation of Pierpoint Freewill Baptist Church, Reverend Richard Massie, Dr. Polisetty and staff, Kim Blankenship, Drema Sturgill, Dr. El Harake and staff of the Carl Lawson Cancer Center, Missy Hatcher, staff of Bowers Hospice House and to the many family members, co-workers, neighbors and friends for their countless gestures of kindness. A Celebration of Life will be held at 11:00am on Friday, November 19, 2021, at Tankersley Funeral Home Chapel in Mullens, WV with Reverend Butch Acord and Reverend Richard Massie officiating. Burial will follow in Blue Ridge Memorial Gardens, Beckley. In honoring Jesse's wishes, the family requests a casual dress. Pallbearers will be Kip and Justin Chandler, Chandler and Broc Johnson, Randy Workman, and Gene Massie. In lieu of flowers, the family asks that donations of sympathy be made to Hospice of Southern WV, 454 Cranberry Dr. Beckley, WV 25801. Online condolences may be expressed to the family at www.tankersleyfh.com The family of Jesse Massie is being cared for by Tankersley Funeral Home, Mullens.

Jesse P. Massie, of Mullens, WV passed away on November 15, 2021, following a short illness. He was born on May 13, 1947, in Glen Rogers, WV to the late Frank and Sarah Annie Massie. Jesse was the last remaining member of his immediate family. In... View Obituary & Service Information

The family of Jesse P. Massie created this Life Tributes page to make it easy to share your memories.

Send flowers to the Massie family.