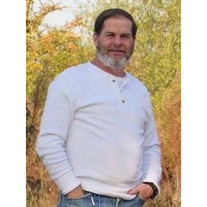 Jerry Franklin Hardee, 55, of Mullens, entered Heaven's gates on Thursday, April 11, 2019 during a heart cath. Born August 25, 1963 in Chapel Hill, NC to the late Isaac "Buddy" Hardee and Marie Campbell Hardee. Jerry was currently employed at the Raleigh Center in Daniels. Previously employed at Appalachian Hospital and Heartland of Beckley. Those left to cherish his memory include his wife, Danessa Cantley Hardee that was his best friend and soulmate; one son, Zach Hardee of Crab Orchard; daughters, Courtney Johnson of NC, Maggie Hardee of Princewick, and Emma Hardee at home; Jerry was Pawpaw to Olivia Strickland of Ohio; foster dad to three children; twin brother, Terry Hardee and his wife, Mary of Chapel Hill, NC; sister, Delaine Marbry and her husband, Gary also of Chapel Hill, NC; special friends, Jim and Merilou Moore of Crab Orchard; special sister-in-law, Karen Boothe of AZ; special niece, Christa Strickland that was more like a daughter; and several nieces, nephews, and a host of extended family. Jerry was a caring giving soul that would help anyone in need. He loved fishing, skating, karaoke, and 80's music. Jerry was a graduate of Chapel Hill High School and Durham Tech where he pursued a nursing degree. He later became a certified Wound Care Practioner. Jerry was also the Owner and Operator of The Rabbit Hole Consignment Store in Sophia. A celebration of Jerry's life will be 1:00 P.M. Wednesday, April 17, 2019 at the Mullens United Methodist Church, Mullens with Pastor Todd Weis officiating. Burial will follow at the Goode Cemetery, Bud Mountain. Friends may call one hour prior to services Wednesday at the church. Family and friends will serve as pallbearers. Online condolences may be expressed to the family at www.tankersleyfh.com. The family of Jerry Hardee is being cared for by Tankersley Funeral Home, Mullens.

The family of Jerry Franklin Hardee created this Life Tributes page to make it easy to share your memories.

Send flowers to the Hardee family.