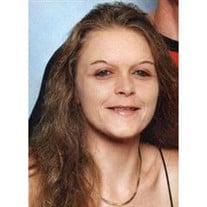 Jennifer Renea Farley, 36, of Stephenson went home to be with our Heavenly Father on March 13, 2013 at Bowers Hospice House following a long battle with cancer. Born July 14, 1976 at Mullens, she was the daughter of Johnnie Farley of Raleigh and Ilene Shrewsbury Farley of Stephenson. Jennifer was a homemaker, of the Baptist faith with a very peaceful spirit, and was an inspiration to all who knew her. In her leisure, she loved spending time with her boys, nieces, nephews, family, and friends. She was preceded in death by her paternal grandmother, Marie Cadle Farley; maternal grandfather, Clyde Shrewsbury, Sr.; and one aunt, Sandra Yvonne Reed. Those left to cherish her memory include her mother, Ilene Farley of Stephenson; her father, Johnnie Farley and his wife, Lynnette, of Raleigh; two sons who she loved with all her life, heart and soul, Ryan Scott Hoover and Steven John Farley Hoover, both of Stephenson; a brother, Christopher Johnson of Stephenson; two sisters, Kayla Farley of Stephenson and Dwana Farley Wilkerson of Oceana; her maternal grandmother, Ruby Shrewsbury of Egeria; three nephews, Jacob, Nick, and Johnathan; two nieces, Riley and Kaylene ; a very special friend who was with her until the end, Kimberly Lindsay; and many aunts, uncles, cousins and friends. Services will be 1:00 P.M. Saturday, March 16, 2013 at the Tankersley Funeral Home Chapel with Pastor Eddie Simpson and Evangelist Ricky Shrewsbury officiating. Burial will follow in the Shrewsbury Family Cemetery, Egeria. Friends may call one hour prior to services Saturday at the funeral home. Family and friends will serve as pallbearers. The family would like to give a special thanks to the Bowers Hospice House for all their kindness and hospitality. For those considering an expression of sympathy the family requests contributions be made to help defray unexpected expenses be made to Tankersley Funeral Home, 102 Moran Avenue, Mullens, WV 25882. The family of Jennifer Farley is being cared for by Tankersley Funeral Home, Mullens.

Jennifer Renea Farley, 36, of Stephenson went home to be with our Heavenly Father on March 13, 2013 at Bowers Hospice House following a long battle with cancer. Born July 14, 1976 at Mullens, she was the daughter of Johnnie Farley of Raleigh... View Obituary & Service Information

The family of Jennifer R. Farley created this Life Tributes page to make it easy to share your memories.

Jennifer Renea Farley, 36, of Stephenson went home to be with...

Send flowers to the Farley family.