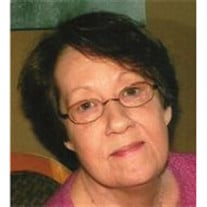 Helen Irene Graham Parker, 70, of Mullens passed away at home with her husband by her side on Sunday, December 22, 2013, after a courageous battle with lung cancer. Born November 27, 1943 at Baileysville, she was the daughter of the late Herbert and Kathleen (Bradley) Graham. Irene was a sweet, loving, and devoted Wife, Mother, "Nanny", and Friend. She was extremely proud of her grandchildren and loved them dearly. She was deeply of the Christian faith and was a hairdresser for 45 years and operated her own salon (Irene's Beauty Salon) in Mullens, WV. She was a graduate of The Little French Beauty Academy, a supporter for sick and hospitalized terminally ill children, supporting many charities throughout the years, and was also an avid animal lover, caring for, and feeding any animal in need. Irene enjoyed her love of flowers, photography, and writing children's stories. During her husband's two terms as Wyoming County Sherriff, Helen proudly supported him during his campaigns and loved the town of Mullens and people in Wyoming County. In addition to her parents she is also preceded in death by her in-laws, Cloyd and Kathleen Parker; and one brother, Dennis Graham. Those left to cherish her memory include her husband of 43 years, C.S. "Sherill" Parker of Mullens; her son, Scott Parker and his wife, Kim and their three children, Nicholas, Kaitlyn, and Chandler of Beckley; her son, Patrick R. Parker and his son, Parker Jace of Charleston; a very special friend that she looked at as a son, Carl Sears; and the family is eternally grateful to her caregiver and friend, Tina Lawson of Corinne; hospice nurse, Teresa Lopez; and her family physician and friend, Dr. Dominador Lao. Services will be 11:00 A.M. Friday, December 27, 2013 at the Mullens Pentecostal Holiness Church with Rev. Lewis Arnold officiating. Burial will follow in Roselawn Memorial Gardens, Princeton. Friends may call from 6:00 P.M. to 9:00 P.M. Thursday, December 26, 2013 at the church and one hour prior to services Friday at the church. Wyoming County Sheriff's Department Deputies will serve as pallbearers along with honorary pallbearers, Scott Parker, Patrick R. Parker, Nicholas Parker, and Carl Sears. Online condolences may be expressed to the family at www.tankersleyfh.com. In memory of Irene the family requests donations of sympathy be made to Hospice of Southern West Virginia 456 Cranberry Drive Beckley, WV 25801. The family of Irene Parker is being cared for by Tankersley Funeral Home, Mullens.

Helen Irene Graham Parker, 70, of Mullens passed away at home with her husband by her side on Sunday, December 22, 2013, after a courageous battle with lung cancer. Born November 27, 1943 at Baileysville, she was the daughter of the late Herbert... View Obituary & Service Information

The family of Irene Parker created this Life Tributes page to make it easy to share your memories.

Helen Irene Graham Parker, 70, of Mullens passed away at home...

Send flowers to the Parker family.