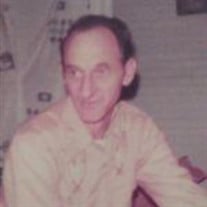 Herman Randall “Bones” McKinney, Sr., 90, of Barkers Ridge, passed away peacefully on Sunday, March 21, 2021. Born October 25, 1930 at Amgio, he was the son of the late Herman and Lessie (Mitcham) McKinney. Randall was an avid horse enthusiast, having rode and shown horses in numerous equestrian exhibits where he won many trophies and awards. In addition to his parents, he is preceded in death by his wife, Barbara; two young sons, James and David; brother, Ray; and two sisters, Mildred and June. Those left to cherish his memory include his sons, Randall “Bunch” McKinney, Jr., and his wife, Polly of Itmann, Richard McKinney and his wife, Rainelle of Barkers Ridge, and William “Yogi” McKinney and his wife, Rhonda of King, NC; grandchildren, Miranda Austin and her husband, Alan of Coal City, Frank McKinney and his wife, Lynn of Troy, Ohio, Andrea McKinney and her fiancé, Mark of Coal City, and Logan McKinney of King, NC; great grandchildren, Jason Austin and his companion, Misty, David Austin, Izabelle McKinney, Zachary, Brady, and Jacob Grimmett, and Cheyenne Grim; a great great grandson, Jaxen Austin; a great great granddaughter due in July; and his last surviving sibling, Arley Mitcham of Kokomo, IN. Services will be 1:00 P.M. Thursday, March 25, 2021 at Tankersley Funeral Home Chapel, Mullens with Pastor Curtis England officiating. Burial will follow in the Beavers Family Cemetery, Baileysville. Friends may call one hour prior to services Thursday at the funeral home. Family and friends will serve as pallbearers. Those wishing to attend the services, CDC guidelines will be followed, social distancing is required, and masks are mandatory. The family would like to express their thanks to the staff at the Wyoming Nursing and Rehab Center, New Richmond for the care shown to Randall while he was there. Online condolences may be expressed to the family at www.tankersleyfh.com. The family of Randall McKinney is being cared for by Tankersley Funeral Home, Mullens.

The family of Herman Randall McKinney, Sr. created this Life Tributes page to make it easy to share your memories.