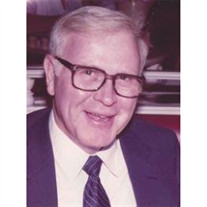 Henry Asbury Canterbury, 91, of Mullens passed away on Thursday, November 23, 2017 following a sudden illness. Born on November 10, 1926 in Pax, West Virginia, he was the son of Henry Canterbury, Sr. and Barbara Hunter Canterbury. Henry was a wonderful storyteller with a long and colorful life to talk about. He was an athlete, an honored World War II veteran, a railroad man, and the patriarch of a loving family. Henry excelled at sports as a young man, earning a football scholarship to West Virginia Tech after graduating from Mullens High School in 1944. His football aspirations were cut short when he was drafted into the U.S. Navy. While serving our country he was a part of the Pacific Campaign on the USS Van Valkenburgh destroyer earning a Pacific Theater Ribbon, American Theater Ribbon and Victory Medal. After the war, he began his long career on the railroad. His career spanned 47 years ending with Norfolk Southern where he rode the rails as a fireman, brakeman and conductor. In his leisure time he loved listening to music, watching baseball, growing roses, and caring for  many family dogs. He enjoyed Carolina Beach, Las Vegas and always being with his family. When we look back on the life of Henry Canterbury, we will remember his kindness, generosity, steady demeanor and love for family and friends. In addition to his parents, he was preceded in death by his wife of 67 years, Maude Marklin Hypes Canterbury; his sister Betty Crotty and her husband Glenn; his brother-in-law Bud Hypes; his sister-in-law Nelva Webster and her husband Sam; and his father and mother-in-law Buford Hypes, Sr. and Annie Evelyn Hypes. Henry leaves behind the broken hearts of his children, Trudy Blackwell and her husband Bucky of Mullens; Tammy McKinney and her husband Clifford of Beckley; and Andy Canterbury of Mullens. Others left to cherish his memory include his five grandchildren, Clint Houck and his wife Andrea and daughters Sarah and Emily; Audra Blackwell and her husband Matthew Martin; Amber McKinney and her husband Andrew Ribner; Mark Blackwell; and Blaine McKinney. He also leaves behind his nephews Dr. Glenn Crotty, Jr. and his wife Kathy; Rick Crotty; his niece Barbie and her husband Dr. Michael Covelli; his sister-in-laws Betty Jo Hypes and Alice Hypes; his brother-in-law Pete Hypes and his wife Rachel; and his nephew Dr. Sam Webster. Services will be held at noon on Tuesday, November 28, 2017 at Highland Avenue Baptist Church, Mullens with Rev. Lewis Arnold officiating. Burial will follow at Blue Ridge Memorial Gardens, Beckley. Friends may call Monday from 6:00 to 8:00 p.m. at the Tankersley Funeral Home and one hour prior to services Tuesday at the church. Pallbearers will be Clint Houck, Mark Blackwell, Dr. Glenn Crotty, Rick Crotty, Matthew Martin, David Harrah, and Sam Stump. For those considering an expression of sympathy, donations may be made to the Highland Avenue Baptist Church, 317 Highland Avenue, Mullens, WV 25882. Online condolences may be expressed to the family at www.tankersleyfh.com. The family of Henry Canterbury is being cared for by Tankersley Funeral Home, Mullens.

Henry Asbury Canterbury, 91, of Mullens passed away on Thursday, November 23, 2017 following a sudden illness. Born on November 10, 1926 in Pax, West Virginia, he was the son of Henry Canterbury, Sr. and Barbara Hunter Canterbury. Henry was... View Obituary & Service Information

The family of Henry Asbury Canterbury created this Life Tributes page to make it easy to share your memories.

Henry Asbury Canterbury, 91, of Mullens passed away on Thursday,...

Send flowers to the Canterbury family.