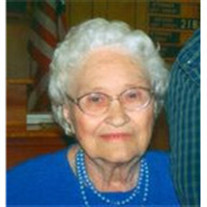 Hazel G. Harman, 89, of Herndon, went home to be with the Lord on Sunday, September 6, 2009, at the home of her son and daughter-in-law, Jackie and Cathy Harman, after a long illness. Born April 29, 1920, at Herndon, she was the daughter of the late Jack and Becca (Graham) Graham. Mrs. Harman was a homemaker, a faithful member of Spruce Grove Missionary Baptist Church where she was a longtime Sunday school teacher for the youth and young adult classes, and a lifelong resident of Herndon. In addition to her parents, she is also preceded in death by her husband of 52 years, Claude E. Harman, in 1996; and a brother, Orville Graham. Those left to cherish her memory include two sons, Ronnie Harman of Reece Harmon Ridge Road, Lashmeet, and Jackie Harman and his wife, Cathy, of Herndon; one daughter, Connie Byars and her husband, Roland (Rick), of Herndon; five grandchildren, Steven Harman and his wife, Sheila, of Shady Spring, Kevin Harman of Athens, Landon Harman and his wife, Terra, Angela Taylor and her husband, Jason, and Joshua Byars and his wife, Lindsey, all of Princeton; four great-grandchildren, Lane, Tyler and Molly Harman and Madalyn Taylor; one brother, Ray Graham and his wife, Layla, of Herndon; three sisters, Merle McKinney of Herndon, Ina Lane of Stephenson and Ethel Lusk and her husband, Frank, of Herndon; one brother-in-law, Dalford Harman and his wife, Nina, of Princeton; three sisters-in-law, Joyce Graham of Helen, Oma Bailey and her husband, Harry, of Green Cove Springs, Fla., and Lela McCormick and her husband, Jim, of Princeton. Services will be 1 p.m. Wednesday, September 9, 2009, at the Spruce Grove Missionary Baptist Church, Herndon, with Pastor Keith Reed, Rev. Gilbert Dodson and Pastor Andrew Bailey officiating. Burial will follow in the Rube Howerton Cemetery at Herndon. Friends may call 6 p.m. to 8 p.m. Tuesday at the Tankersley Funeral Home, Mullens, and one hour prior to services at the church. Grandsons and nephews will serve as pallbearers. The family would like to express a special thank you to Amy McComas, Jennifer Allen, Melissa Carr, Chaplain Gary Durham and Amedisys Hospice Services of Bluefield. Arrangements have been entrusted to the Tankersley Funeral Home, Mullens.

Hazel G. Harman, 89, of Herndon, went home to be with the Lord on Sunday, September 6, 2009, at the home of her son and daughter-in-law, Jackie and Cathy Harman, after a long illness. Born April 29, 1920, at Herndon, she was the daughter of... View Obituary & Service Information

The family of Hazel G. Harman created this Life Tributes page to make it easy to share your memories.

Send flowers to the Harman family.