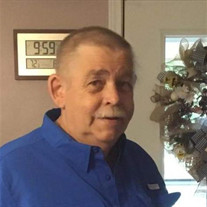 Harry Lee Blankenship, Jr., 65, of Basin, passed away on Saturday, July 24, 2021 at his residence. Born August 31, 1955, at Leghorne, Italy, he was the son of the late Harry Lee Blankenship, Sr. and Betty Shrewsbury. Harry was a former coalminer. In his leisure he enjoyed hunting, fishing, tending to his bees, spending time with his family, especially his grandchildren, and being with his church family. In addition to his parents, he is also preceded in death by his stepfather, Arthur James Shrewsbury; and one sister, Kathy Blankenship. Those left to cherish his memory include his loving wife, Joanna Blankenship of Basin; one daughter, Heather Woodson of Itmann; four sons, Harry Blankenship, III and his wife, Brandy of Hiawatha, Brian Blankenship of Midway, Jeremy Basham of Milams Creek, and Justin Basham and his companion, Justin Collins of Lexington, NC; seven grandchildren, James Woodson, Cheyann Blankenship, Adrianna Blankenship, Brian Blankenship, Kyra Blankenship, Makala Woodson, and Hunter Blankenship; one brother, Gary Shrewsbury and his companion, Sandy Mills of Camp Creek; one aunt, Sue Royce; and one uncle Bernie Shrewsbury. Services will be 1:00 P.M. Wednesday, July 28, 2021 at the Spruce Grove Missionary Baptist Church, Basin with Rev. Danny Lusk officiating. Burial will follow in the Shrewsbury Cemetery, Basin. Friends may call one hour prior to services Wednesday at the church. Pallbearers will be Brian Blankenship, Justin Collins, James Woodson, Chase Adkins, Zack Grimmett, and Jonathan Adkins. The family would like to express their heartfelt thank you to David Adkins, Jr. and his wife, Jan. Online condolences may be expressed to the family at www.tankersleyfh.com The family of Harry Blankenship, Jr. is being cared for by Tankersley Funeral Home, Mullens.

The family of Harry Lee Blankenship, Jr. created this Life Tributes page to make it easy to share your memories.

Send flowers to the Blankenship family.