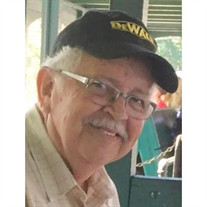 Glen Ronald Wilson, 73, of Corinne, went home to be with the Lord on Friday, April 28, 2017 at his residence surrounded by his family following a long illness Born October 8, 1943 at Amigo, he was the son of Kay Albert Wilson and the late Velva (Wood) Wilson. Glen was a former employee of Mullens Grocery and retired from Sterling Grocery Company as a Salesman with 30 plus years of service. He was a member and Deacon of the Corinne Missionary Baptist Church. In his leisure he enjoyed working on cars and spending time with family. In addition to his mother he is also preceded in death by one grandson, Matthew Scott Bailey; and one brother, Jerry Allen Wilson. Those left to cherish his memory include his loving wife of 54 years, Mable Wilson of Corinne; two daughters, Connie Cook and her husband, Dale of Roanoke, VA and Renee Bailey and her husband, Don of Charlotte, NC; one son, Kevin Wilson and his wife, Adriane of Ghent; eight grandchildren, Ryan Cook and his wife, Jaclyn, Rachel Cook, Nicholas Bailey, Heaven, Isabella, Annie, Liam, and Lucy Wilson; three sisters, Brenda Newsome of Shady Spring, Sharon Simmons of Otsego, and Vicky Wrenn of Corinne; and one brother, Kenny Wilson of Crab Orchard. In keeping with Glen's wishes he will be cremated and a Memorial Service will be held 1:00 P.M. Monday, May 1, 2017 at Corinne Missionary Baptist Church, Corinne with Dr. Wetzel Young officiating. Friends may call one hour prior to services Monday at the church. The cremains will be entombed at Sunset Memorial Park Mausoleum, Beckley. In lieu of flowers, donations of sympathy may be sent to Hospice of Southern West Virginia, P.O. Box 1472, Beckley, WV 25802. The family would like to thank the staffs at Raleigh Regional Cancer Center, Hospice of Southern West Virginia, and Wyoming County Council on Aging. Online condolences may be expressed to the family at www.tankersleyfh.com. The family of Glen Wilson is being cared for by Tankersley Funeral Home, Mullens.

Glen Ronald Wilson, 73, of Corinne, went home to be with the Lord on Friday, April 28, 2017 at his residence surrounded by his family following a long illness Born October 8, 1943 at Amigo, he was the son of Kay Albert Wilson and the late Velva... View Obituary & Service Information

The family of Glen R. Wilson created this Life Tributes page to make it easy to share your memories.

Send flowers to the Wilson family.